Steampunk Review: Gideon Smith and the Mask of the Ripper by David Barnett 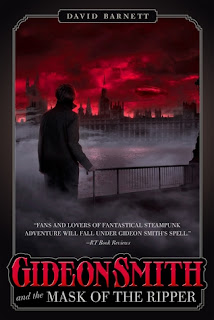 Despite relying on the tired old trope of the amnesiac hero, David Barnett manages to concoct an entirely satisfying and thoroughly entertaining third adventure for our titular hero with Gideon Smith and the Mask of the Ripper.

The legend of Jack the Ripper is something Barnett has been teasing since the first book, so it's nice to finally come back to it and find out what it's all about. It's not the identity of the Ripper that's most intriguing however, but how he fits into the lives of Gideon, Maria, Aloysius, Rowena, and the rest. There are layers upon layers of mystery here, with each revelation casting larger shadows on the others, and the final reveal a legitimately shocking twist.

Overall, this is a very different story than the first two books, almost more laid back and traditional - if any story featuring Jack the Ripper, an clockwork girl, and a T-rex in the sewers can be considered traditional. It's not nearly as over-the-top, doesn't add anything to the steampunk aspect, and remains firmly rooted in the streets of London. Having said all that, it's an incredibly tense tale, one that has Gideon Smith missing, Rowena Fanshawe on trial for murder, and Inspector Lestrade dealing with a prostitute strike on top of the Ripper's murders.

What we do get here is a great deal of character development, most of it revolving around questions of identity. Maria's search for humanity is a driving force of the story, fueled by her love for Gideon, and given surprising direction by Inspector Lestrade's secret love, who has identity issues of her own. Gideon's amnesia, of course, offers up another search for identity, both as a man and as Hero of the Empire, while the situation with Jack the Ripper forces Aloysius Bent to confront some aspects of his own identity. Most importantly, though, her arrest, trial, and resulting revelations about her past cause Rowena Fanshawe to completely redefine her identity, even if that's not necessarily good news for the empire.

As intriguing and mysterious as either of the first two adventures, what Gideon Smith and the Mask of the Ripper lacks in adventurous fun, it makes up for in its character development. We don't get a true cliffhanger this time around, but a wide open ending that leaves a lot of possibilities for Barnett to explore in future volumes.


Disclaimer: I received a complimentary copy of this title from the publisher in exchange for review consideration.This does not in any way affect the honesty or sincerity of my honest review.
book review David Barnett steampunk thriller