Every vampire story gets compared to Dracula. Whether a stalker or a sparkler, a bloodsucker’s got to measure up to our nebulous—equal parts Stoker, Lugosi, and Lee—vision of the count. Some undead don’t compare well, others are carbon copies, but adhering to or defying the Dracula-standard looms large. But does meeting our expectations of what makes a Dracula doom us to a single, century-old flavor of undeath?

I love Stoker’s classic vampire—for style and tension, it’s hard to beat. I’m also a huge fan of the audacious bloodsuckers of ’80s and ’90s film. Glittery vampires can also be fine… especially if there’s a Rifftrax commentary playing. It’s rare, though, to see a story in Stoker’s tradition that casually twists his tropes. Often, bucking Dracula is the whole shtick, giving us vampires akin to zombie hordes, that drink pseudo-blood cocktails, or that have great abs. Just because I enjoy Stoker’s novel doesn’t mean I need to read it again, though. And wanting something different doesn’t need to mean outright rebellion.

As one of the creators of the Pathfinder world, I’ve spent a lot of time considering how fantasy can be more inclusive—more welcoming to audiences of every stripe. Working on Bloodbound, I wanted to apply the same questions I ask when I’m telling fantasy stories to a work of gothic fiction. 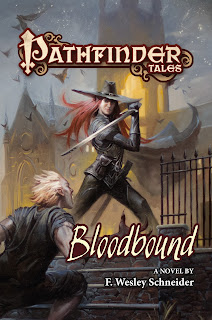 You don’t need to look any further than Bloodbound's cover to see I’m a Robert E. Howard and Hideyuki Kikuchi fan. My novel was always going to feature a vampire hunter in a wide-brimmed black hat. Solomon Kane, Vampire Hunter D, Blade, Alucard, and others nimbly lined up for the role. And using them as placeholders for an outline was fine, but that’s a starting point, not the end. Everything’s worth reexamining and, if it makes a story more interesting, tweaking to taste. Larsa, Bloodbound’s actual protagonist, certainly isn’t the first woman vampire hunter, but as soon as the character shifted from being a Solomon Kane clone to being her own woman, she got much more interesting. Her role didn’t change, the challenges of a half-vampire or a vampire hunter didn’t either, but her chances of walking an entirely familiar path plummeted. Stoker or Howard might not have made their vampire hunters women, but there’s no reason not to today. Rather, there’s every reason to today.

In a gothic horror story I want atmosphere—the haunted hero, the creepy castle, the arch villain. At no point do I think those elements have to have a proscribed heritage, gender, sexuality, race, age, or other experience. We might hold expectations based on what’s come before, but that doesn’t necessarily make them fundamental features. If the question at the heart of imaginative storytelling is “what if,” then Bloodbound asks how a modern lens might refocus classic gothic horror tropes? What if Van Helsing and Solomon Kane were women? What if Lucy Westerna was a guy? What if Dracula’s bride was a queer man? What if Quincy Morris was Middle Eastern? What if no one pursued Dracula? Bloodbound’s a playground for these questions and plenty more, but it’s still a gothic tale. And, hopefully, one that creeps you out whether you hate Dracula or love it.

F. WESLEY SCHNEIDER has published countless gaming products for both Pathfinder and Dungeons & Dragons, and is a former assistant editor of Dragon magazine. Bloodbound is his first novel.

Larsa is a dhampir-half vampire, half human. In the gritty streets and haunted moors of gothic Ustalav, she's an agent for the royal spymaster, keeping peace between the capital's secret vampire population and its huddled human masses. Yet when a noblewoman's entire house is massacred by vampiric invaders, Larsa is drawn into a deadly game of cat-and-mouse that will reveal far more about her own heritage than she ever wanted to know.