Horror Review: The Bazaar of Bad Dreams by Stephen King

A long time ago, I got into a staring match with this ugly tabby cat. It wasn't a real cat, but one plastered on the cover of a book. It was a thick book, the kind of book my mother might read, by some guy who misspelled the word 'cemetery' on the cover. Eventually, I won the staring contest, picked up the book, and read the back cover. Holy hell, this sounded awesome! After about 10 minutes of pleading with my mother, we actually went home with 2 copies of Pet Sematary in the shopping bag. She wasn't too thrilled about the idea of a 9 year old reading such a book, and wanted to read it herself to make sure it was suitable.

It, of course, was far from suitable. My mother gave up halfway through, but I read that sucker cover-to-cover. I lugged it everywhere, including the schoolyard, and took a perverse sort of pride in people being shocked by it. It was the first 'adult' book I read, and it took me months to do so, but it started a lifelong obsession with Stephen King. 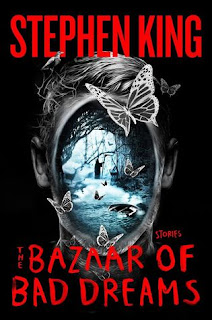 While we've had our differences over the years, and I've been critical of some of his work over the past decade or so, it's always exciting when he puts out a new collection of short stories. Even if they never manage to rival the likes of Night Shift or Skeleton Crew, those collections are always a must-read. His latest such collection, of course, is The Bazaar of Bad Dreams . . . and it's a pretty solid body of work.

The opening tale, Mile 81, is vintage Stephen King. Here you've got a daring young kid, an abandoned rest stop, and a very hungry, very sinister automobile. This is the kind of story that could get real silly, real fast, but King holds a tight reign over the narrative, keeping it painful and creepy right through to the end.

Given it's quiet, subtle sort of nature, I'm surprised by how much I enjoyed Batman and Robin Have an Altercation. Having just lost my father this summer, I found myself deeply invested in this tale of an awkward lunch and an unfortunate accident.

The Dune was another classic King tale, more about the telling than the tale itself, with a final twist that the reader sees coming . . . and is completely okay with that.

I didn't enjoy Bad Little Kid quite as much as I thought I might, but it's still an effective tale of horror that has you wondering whether the condemned man is making it all up - at least until that cheesy, outdated little propeller hat makes a final appearance.

Morality was interesting, but too heavy handed to really work as anything more than an obvious morality tale.

Back in the day, I nearly bought a Kindle just so I could read Ur, but Amazon weren't shipping them to Canada at the time. While the story might have lost a bit of its novelty factor, it's still a fun read that touches on some classic King questions of fate and the future.

Herman Wouk is Still Alive was just depressing, with a pair of entirely unlikable women at its heart.

Blockade Billy I read back when it was released as a standalone story, and I enjoyed it just as much the second time around. King knows horror and King knows baseball, and he frames the story the way a catcher frames a pitch.

That Bus is Another World is just altogether odd. It's far too short, completely leaves the reader hanging, and is entirely surreal. Despite that, it's intense, it's exciting, and it probably got my heart racing more than any other story here.

By far my favorite tale here, Obits, is the story of a wannabe journalist who settles for writing mean-spirited obituaries for a TMZ kind of site. When a spiteful preemptive obituary results in the death of his editor, he discovers just how much power the written word can have. The way King twists this one, magnifying the horror, is really quite brilliant.

Summer Thunder ends the story on a very melancholy note, but it's a powerfully emotional story. With the world well on its way to an end, two sick old men and an even sicker dog decide to tackle death on their own terms.

The Bazaar of Bad Dreams isn't a perfect collection, and I'll freely admit to skipping over the poetry, but those stories that really work - Mile 81, Batman and Robin Have an Altercation, Obits, and Summer Thunder - are worth the price of admission.