Coming up this week, stay tuned for my Most Anticipated Fantasy Reads of 2016. 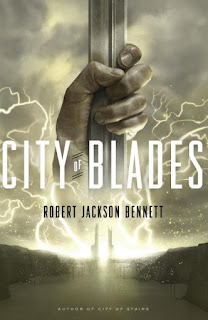 A generation ago, the city of Voortyashtan was the stronghold of the god of war and death, the birthplace of fearsome supernatural sentinels who killed and subjugated millions.

Now, the city’s god is dead. The city itself lies in ruins. And to its new military occupiers, the once-powerful capital is a wasteland of sectarian violence and bloody uprisings.

So it makes perfect sense that General Turyin Mulaghesh— foul-mouthed hero of the battle of Bulikov, rumored war criminal, ally of an embattled Prime Minister—has been exiled there to count down the days until she can draw her pension and be forgotten.

At least, it makes the perfect cover story.

The truth is that the general has been pressed into service one last time, dispatched to investigate a discovery with the potential to change the world--or destroy it.

The trouble is that this old soldier isn't sure she's still got what it takes to be the hero. 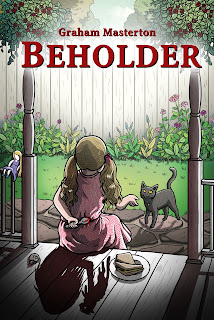 “Once upon a time in a faraway land, a princess was born who was so beautiful that nobody was allowed to look at her for fear that they would be so jealous that they would try to harm her…. no mirrors could be hung in the palace because they would shatter into a hundred thousand pieces if she were to look into them…”

Fiona loved this fairytale, because she led a similar life. There were no mirrors in her house. She lived only with Mummy, who protected her little daughter from jealous eyes, and never let Fiona out of the house and patio. That’s why she couldn’t play with other children and spent her time with only Mummy and her doll Rapunzel, who had no face. "You don’t need a beautiful face to be beautiful. Beauty is in the eye of the beholder," says Mummy. Fiona did not understand these words until one day she was home alone and noticed that for the first time ever her mum had forgotten to lock her bedroom door... (less)

Last week's read (the final ARC release of the year), turned out to be a disappointing DNF, so I've had a chance to catch up on some of my reading. As soon as I get a chance to sit down and collect my thoughts, look for reviews of The Winter Garden by Kara Jorgensen and Damned Children of Naor by Justyna Plichta-Jendzio coming later in the week. As for what I'm reading right now, I find myself bouncing back-and-forth between a really fascinating historical fantasy novel and an anthology of twisted horror stories.

The Shards of Heaven by Michael Livingston is a book I was really looking forward to, but it got 'lost' in the post, showing up more than a month late, in a torn and soggy envelope - kind of fitting, considering the trident of Poseidon (which may also be the staff of Moses) is central to the tale. This is an historical fantasy, set in Egypt after the death of Caesar, that considers the Greek, Roman, and Christian mythologies and asks whether it is "possible that all the deities of the world were reflections of the same, single, united god?" If that sounds a bit too cerebral, just wait until you see Poseidon's trident being used to raise up the seas and smash a ship to pieces. You'll be hooked.

Sacrificing Virgins by John Everson is a book I had planned to review earlier this month, but it's proven to be so deeply dark and depraved that I've been savoring it, one story at a time. Despite buying several of his books, this is my first taste of Everson, and it has me wondering what the hell I was waiting for. These short stories are wildly imaginative, darkly atmospheric, and seriously depraved. Alternately erotic and sadistic, they're full of the blackest humor, and completely barren of hope. I know it sounds ridiculous, but this is a book that has had me covering my eyes, turning my head aside, and reading almost tentatively at times. Some of it is beautiful, and some of it is shocking, but it's all powerful.

What's topping your shelves this week?
epic fantasy horror Mailbox Monday Stacking The Shelves What Are You Reading?