Fantasy Review: The Shards of Heaven by Michael Livingston 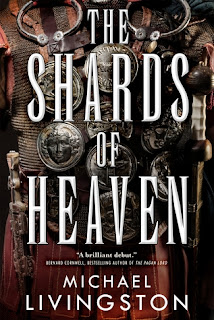 Equal parts historical fiction, epic fantasy, and philosophical discourse, The Shards of Heaven is an altogether fascinating read. Opening with the assassination of Julius Caesar, the story details the war that took place between his heirs and allies, with Cleopatra, Marc Antony, and Caesarion (Caesar's son) on the side of Egypt, and Octavian (Caesar's great-nephew) and Juba (Caesar's adopted son) on the side of Rome.

It's with the role of Juba, however, that fiction begins to deviate from fact. Michael Livingston portrays Juba as a vengeful son, secretly plotting revenge against the world for his real father's defeat at the hands of Caesar. Further deviating from fact into fantasy, Juba has discovered the mythological trident of Poseidon, which also happens to be the equally mythological staff of Moses.

That, right there, is where the story really pulled me in. Anybody who has studied mythology knows that there are themes and stories that are common to faiths across the world. Livingston looks at the various mythologies of the ancient world - most notably those of Greek, Roman, and Jewish origin - and asks whether it is "possible that all the deities of the world were reflections of the same, single, united god?" Furthermore, in questioning why such a god allows bad things to happen, he suggests that god may actually be dead - an event that allowed The Shards of Heaven to fall to Earth, where they were harvested as magical talismans.

If that sounds a bit too cerebral, just wait until you see Poseidon's trident being used to raise up the seas and smash a ship to pieces with a massive watery fist. The power of the trident/staff terrifies Juba, and exhausts him in his attempts to control it, but it provides Octavian with the power to change the world. As terrifying as it is, however, the shard that became the Ark of the Covenant are speculated to be ever more incredible, with the power to destroy world. So, what we end up with here is a dual fantasy. On the one had we have a rather traditional bit of historical fiction that acknowledges the true powers of the ancient world, but which allows a cast of minor characters - historical footnotes, if you will - to drive the narrative forward. On the other hand, you have an epic fantasy that takes the seeds of faith and creates its own mythology. Everybody wants a shard of their own, as much for the mythological significance as the magical powers they contain, leading to a dual race against time as historians search and armies clash.

Definitely one of the most original fantasies I've read this year, The Shards of Heaven really does work on multiple levels. It's the mythology of the shards that intrigued me the most, and Juba who made me a fan of the story, but those looking for a solid historical tale of Egypt versus Rome will be equally satisfied.


Disclaimer: I received a complimentary copy of this title from the publisher in exchange for review consideration.This does not in any way affect the honesty or sincerity of my honest review.
book review historical fantasy Michael Livingston