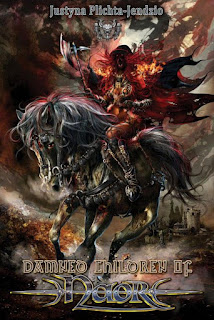 If you haven't yet had the chance to discover the world of Naor by Justyna Plichta-Jendzio, then you need to get reading. I know you're not supposed to judge a book by its cover, but I can promise you these stories are as bad-ass awesome as that cover suggests. This is a series that is full of both dark and light, magic and monsters. There are definitely elements of both classic and pulp fantasy to it, but they are flavored by a darker, more mature outlook.

Damned Children of Naor can be read as a standalone novel, so don't feel as if you need to catch up to enjoy it, but the series definitely gets better the more you read of it. There is a lot of world building and mythology here, with different aspects revealed and explored in each book.

The first story here, Time of Storms, is easily the strongest of the three. Here we have an Arabic style and setting, with a young merchant's daughter chosen by the goddess of fate to join the royal harem of Prince Tarragon. Mists of Midalvan trades the darkness of slavery for that of vampirism, further developing the rather deep monstrous mythology of the first three books. The final tale, Spark of Truth, changes things up again, introducing us to a female mercenary and a young woman accused of being a fire demon.

While Justyna's writing has remained strong throughout the series, and the depth of her imagination astounds me with each new revelation, I think this may be her strongest book in terms of characterization. I can't put my finger on what it was about them, but the women here all came alive, demanding their place at the heart of the narrative, and driving the story forward. They represent a nice blend of traditional fantasy subject (they all reject the victim label) and more progressive fantasy heroine. These are strong, complex characters around whom the mythology takes shape.

Perhaps the greatest compliment I can pay to these stories is that I always come away wanting more. That's not so say they're lacking in any way, or that there's something missing, I just literally want more - more stories, more mythology, and more world building. A part of me does wonder if there's a larger end-game lurking, a wider narrative framework that she is still waiting to reveal, but that takes nothing away from the stories themselves. The three stories of Damned Children of Naor are fantastic on their own, even stronger for being collected together, and something approaching majestic within the context of the series.