#SPFBO Review: Bloodrush - A Soul For Trouble - Under a Colder Sun

on November 20, 2015
For the first time in months I am caught up on my release date reviews, with not a lot of new fiction on the calendar for Nov/Dec, so I've started diving into the finalists of Mark Lawrence's Great Self-Published Fantasy Blog-off. While I had only planned to tackle a pair of titles for the month, one was rather short, and the other was a quick read, so I decided to slip in a third.

As much as I don't like assigning a number or a star value to a read, it's the only fair way for 10 of us to objectively compare the finalists. So, with that said, my trio of reviews . . . in ascending order . . . are as follows: 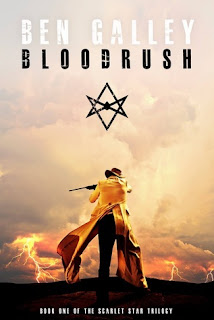 As much as I liked the setting of Bloodrush, with a faerie-infused old west frontier, I have a really hard time finding anything new or engaging in coming-of-age tales. To Ben Galley's credit, there's enough violence, gore, and profanity here to counter the YA feel, but we're still talking about a story that's centered around a moody, obnoxious 13-year old kid who is just as often wise-beyond-his-years as he is suitably-foolish.

Tonmerion (Merion) Hark is the son of the murdered Prime Lord Hark, forced west across the Iron Ocean to the very brink of civilization in Fell Falls, Wyoming. Far from home and denied the luxuries of a life of prestige, he's also far from friends and family - with a 12-inch faerie named Rhin as his only company.

What we have here is an imaginative alternate history novel wrapped in the trappings of both the western and fantasy genres. Galley makes good use of that genre clash, inventing a system of blood magic that's rather intense, and offering us monsters like the railwraiths. Unfortunately, it wasn't enough to overcome the weaknesses of Merion as a protagonist. In addition, the narrative was often awkward and uneven, with an annoying habit of changing POVs within a scene.
[6/10] 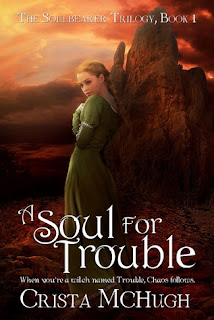 Given that it's more a romance novel with fantasy elements than a fantasy novel with romantic elements, I was surprised by how much I enjoyed A Soul For Trouble. This was a very quick read for me, and one that I found to be a lot of fun. Crista McHugh has a comfortable sense of narrative style, a good grasp on her characters, and a flair for witty dialogue. It's not a laugh-out-loud type of story, but one that I found myself smiling over on a regular basis.

Arden (Trouble) Lesstymine is not just the only blonde-haired, blue-eyed soil in town, but she's also a witch. As a result, she's used to getting more than her fair share of attention, but nothing could prepare her for becoming the next vessel of Loku, disembodied god of chaos. On the one hand, she gets to wield his god-like power but, on the other hand, she's slowly losing her mind. Of course, it doesn't help that she has suddenly acquired a Knight of Gravaria as her sworn protector, become the sworn enemy of a dangerous necromancer, and found herself the object of a Prince's obsession.

As much as the love triangle between Trouble, Dev, and Kell drives much of the action, I liked all three characters enough to roll with it, and the insanity angle, with Loku's insanely funny (and brutally inappropriate) running commentary pulls it altogether. There's a lot of cheesy romance and overt sexism to the tale, but it's all clever and self-aware, not quite satire but clearly deliberate. It's a fast-paced tale, and one that I breezed through in just a few nights. Sure, it could have used a few more action sequences, and I would have like more in the way of mythology or world-building, but it was still a thoroughly enjoyable read.
[7.5/10] 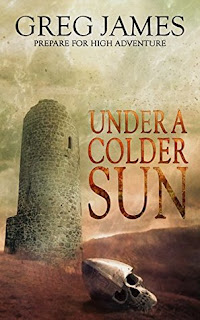 Take a very grimdark sort of tale, put an uncomfortably dark anti-hero at the forefront, and you have the basic recipe for Under a Colder Sun. I've read a lot of fantasy, and I do tend to enjoy the darker side of the fantasy genre, but even I was a bit shocked at what Greg James pulled off here.

Khale the Wanderer is a man who would be the villain in any other tale. He's "a reaver with a demon’s soul" who is equal parts warrior and bandit . . . a rapist and a murderer. He is an ugly sort of fellow, deeply flawed, and amoral - a man who willingly does evil, but does so for the right reasons. Princess Milanda, the young woman he's charged with escorting across the land, is your typical sheltered innocent, but she grows and evolves (rather sadly, it must be said) as the story moves along. Her protector, Leste, is an unusual sort of woman, a trusted guard who possesses far more luck than skill.

There were a lot of dreams and memories here that tugged at the overall pace, but James is a strong enough author to carry the read through those soft spots. I was concerned with how the novel might progress, once the novelty wore off, but this was a solid sword and sorcery story, set in the grimdark mold. It could have used a bit more world-building, but I loved what we were told about the magic and the mythology. Similarly, the characters could have used a bit more depth, with a few lighter aspects to balance out the tale, but they fit the world.

I'm still not sure how I feel about the ending, and I kind of like that. It was suitably over-the-top, but this is one of those stories that just leaps into the climax without warning. In addition, it's a story that relies on a huge twist/reveal to justify that climax, but even if I didn't see it coming, it made sense in hindsight.
[8/10]