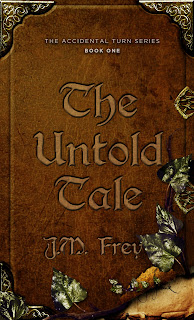 The Untold Tale, the first book in the Accidental Turn Series by J.M. Frey, is an altogether lovely deconstruction of epic fantasy, portal fantasy, and traditional romantic fantasy - and one that is delightfully entirely self-aware. While other reviewers have labeled it as feminist fantasy, I think that is a mistake. Such a view is simply too . . . well, simple (for lack of a better word). Yes, there are feminist elements within that deconstruction, but they are only a part of the story.

This is such a fun tale, and one that delights in twisting tropes and stomping all over stereotypes. Our hero, young Forsyth, is the traditionally younger, weaker, plainer, stuttering, less heroic brother. An oft-neglected noble and secret spy, he lives in the constant shadow of his stereotypically heroic (and barbarian-bimbo) brother. Really, it is Kintyre who would traditionally be the hero - he is, after all, who the women swoon over - and Forsyth expects his story to be usurped at any time by the warrior, but denying that literary rebellion is the whole point.

Our window into this world is a young woman named Pip, and that is where things get really interesting, She is a Reader from outside the story who made her way into the novel and survived brutal torture to arrive at Forsyth's side. She is a fan of the The Tales of Kintyre Turn, and is constantly surprised at how little she knows about Forsythe - since, of course, he has never been the main character. The whole world-building mythology here of a civilization that exists in literary terms is just marvelous. Frey has a lot of fun with that portal aspect, and even has Pip drop other literary references throughout the novel that only we, as Readers ourselves, have any chance of recognizing. At the same time, she presents us with a medieval fantasy world that is very real - as full of poverty and disease as it is magic and heroism.

Despite the fun, playful elements, and in start contrast to the clever rewriting of fantasy tropes and stereotypes, this is often a very dark story. Do not let the oddity of it fool you. Yes, it is often laugh-out-loud funny, but it is just as often cringe-and-shudder horrifying. Frey demonstrates a true passion for the genre, as well as a deep understanding of what comprises it. The Untold Tale is odd. It can often be unsettling. Once in a while it is even absurd. Yet, it can never be accused of being over-the-top, is never boring, and manages to delight as both an entertaining read and a clever skewering of the genre. 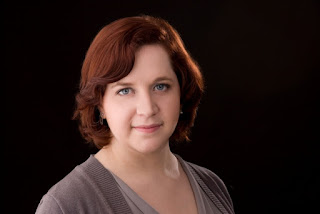 J.M. Frey is a voice actor, SF/F author, professionally trained music theatre performer, not-so-trained but nonetheless enthusiastic screenwriter and webseries-ist, and a fanthropologist and pop culture scholar. She’s appeared in podcasts, documentaries, radio programs, and on television to discuss all things geeky through the lens of academia. J.M. lives near Toronto, loves tea, scarves and Doctor Who (all of which may or may not be related) and her epic dream is to one day sing a duet with John Barrowman.

An epic fantasy meta-narrative about megafan Pip, who wakes up in the novel series that she’s loved since being a teenager. However, the world is darker, and far more dangerous than she could have ever predicted, especially as the hero is a bigger misogynistic ass than she knew. The Accidental Trilogy chronicles the adventures of Pip in a world whose tropes, clichés, pitfalls and loopholes she can predict and circumnavigate, and what happens when she pulls the characters outside of the comfort of the fantasy world for which they were written.

Master Forsyth Turn isn't a hero. He's never wanted to be one, either; not since his older brother Kintyre found the enchanted sword Foesmiter and waltzed away from his family, his estate, and his responsibilities to become one – and dumped all of his responsibilities on Forsyth.

And then, raiding the castle of a wanted criminal, Forsyth's men rescue Lucy Piper. A bafflingly blunt woman, oddly named and even more oddly mannered, Lucy Piper claims to know things about Kintyre and Forsyth's lives that she can't possibly be privy to. She crashes into Forsyth's quaintly sedentary life like an errant comet and before he knows it, she has him convinced that he is the only man who can join her on her quest to find a magical gateway back to her far-away home. She drags Forsyth into the kind of adventure that only his brother could have imagined, testing his mettle and forcing Forsyth to confront his own self-shame and the demons, and the bullying that had characterized his childhood. But the Viceroy, Kintyre’s arch-nemesis, is after Lucy Piper and her magical gateway as well. And the truth of why threatens the stability of the whole Kingdom... Perhaps even their whole world.

Lucy Piper might be able to convince Forsyth that he can be a hero, but is it really his fate to defeat the one villain that even the great Kintyre Turn has never managed to best? 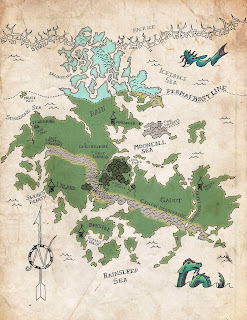