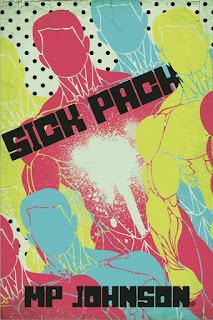 People joke all the time that their body just isn't into exercise, that no matter how hard they try to live right, it rebels against them. For most of us, that's all in our heads. For Fabulo and his Sick Pack, it's a sad and dangerous truth. You see, his hypnotic abs have had enough, and they're breaking out, taking off, going out on their own, leaving him with a flat pubescent chest and a gaping hole in his vanity.

This is, quite possibly, the most bizarro tale I have ever read. Seriously, kudos to M.P. Johnson for messing with my head, but for keeping me hooked enough to keep reading.

This is not a book to be explained. It's a book to be experienced. It's part romantic parody, part existential road trip, part gross-out horror, and all bizarro. From the runaway abs, to the band of emancipated appendages, to the hungry belly beast, this is a weird, funny story that even manages to crunch in a moral or two.