Waiting on Wednesday: The Last Mortal Bond by Brian Staveley

on October 21, 2015
"Waiting On" Wednesday is a weekly event, hosted by Jill over at Breaking the Spine, that spotlights upcoming releases that we're eagerly anticipating. 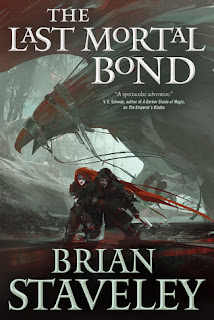 The trilogy that began with The Emperor's Blades and continued in The Providence of Fire reaches its epic conclusion, as war engulfs the Annurian Empire in Brian Staveley's The Last Mortal Bond


Brian announced on Facebook last week that "It is finished," and those are 3 of the sweetest words I have heard in a good long while. We're looking at a March release, as opposed to January (as was the case with the first two books), so I suspect there won't be an early ARC landing for xmas . . . but one can always hope.
Brian Staveley epic fantasy Waiting On Wednesday