Waiting on Wednesday: Chains of the Heretic by Jeff Salyards

on October 14, 2015
"Waiting On" Wednesday is a weekly event, hosted by Jill over at Breaking the Spine, that spotlights upcoming releases that we're eagerly anticipating. 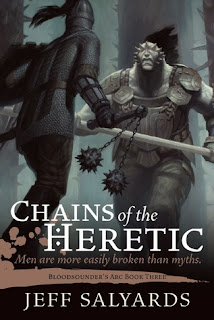 Emperor Cynead has usurped command of the Memoridons—Tower-controlled memory witches—and consolidated his reign over the Syldoonian Empire. After escaping the capital city of Sunwrack, Captain Braylar Killcoin and his Jackal company evade pursuit across Urglovia, tasked with reaching deposed emperor Thumarr and helping him recapture the throne. Braylar’s sister, Soffjian, rejoins the Jackals and reveals that Commander Darzaak promised her freedom if she agreed to aid them in breaking Cynead’s grip on the other Memoridons and ousting him.

Imperial forces attempt to intercept Braylar’s company before they can reach Thumarr. The Jackals fight through Cynead’s battalions but find themselves trapped along the Godveil. Outmaneuvered and outnumbered, Braylar gambles on some obscure passages that Arki has translated and uses his cursed flail, Bloodsounder, to part the Godveil, leading the Jackals to the other side. There, they encounter the ruins of human civilization, but they also learn that the Deserters who abandoned humanity a millennium ago and created the Veil in their wake are still very much alive. But are they gods? Demons? Monsters?

What Braylar, Soffjian, Arki, and the Jackals discover beyond the Godveil will shake an empire, reshape a map, and irrevocably alter the course of history.


Jeff announced on Facebook last week that his final comments and corrections to the galleys have been submitted, which means we can officially start dreaming of ARCs. And, as if anticipation weren't already high enough, he's gone and promised, "revelations, rude dialogue, sarcastic smack downs, gross humor, crazy battles, an awkward sex scene, and hopefully even a couple of moving places that make you feel the feels." Oh, yeah . . . bring it on!
epic fantasy Jeff Salyards Waiting On Wednesday