Thriller Review: Trust No One by Paul Cleave 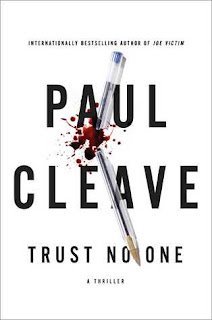 If you want to get the maximum enjoyment out of Trust No One, then put it down immediately after you read about the WMD (Wedding of Mass Destruction). Let it sit unfinished and unresolved in your imagination, allow the big questions to go unanswered, and enjoy the lingering mystery forevermore. That's not to say there's anything wrong with how Paul Cleave resolves things, it's just that the not knowing is the best part of the book.

Seriously, this is a story that's at its best when the reader is at their most confused and disoriented . . . much like Jerry Grey himself.

As the cover blurb reveals, Jerry Grey is a thriller writer who publishes under the pseudonym of Henry Cutter. He's a good guy - a faithful husband and a loving father - who is very much aware of how fortunate he's been in his life and his career. Not yet fifty, he's shocked when the doctor diagnoses him with early onset (and rapidly progressing) Alzheimer's disease, casting all the little mistakes and moments from the past year in a new light. It's a situation that's both heartbreaking and terrifying, with Cleave doing a masterful job of making us live the confusion of advancing dementia.

Half of the story is told in the past, revealing Jerry's attempts to cope with the diagnosis at home, while the other half is told in the present, revealing his attempts to cope with the dementia in a long term care facility. In between, we have a ton of questions, with each new revelation and confession only adding more. Adding to the confusion, we have not just one, but three unreliable narrators telling the story. There's the Jerry that narrates the story to the reader; the past Jerry who writes to future Jerry through his Madness Journals; and the voice of Henry Cutter, who also writes to Jerry through those same Madness Journals. Three different voices, all from the same man, existing in different stages of his dementia, and none of them with any consistent answers.

I devoured the first 200 pages in a single sitting, and I think that is how it's best enjoyed. Don't think about it, don't question the medical science, and don't try to deconstruct the narrative. Just settle in and enjoy the wild ride - let the questions pile up, and appreciate skill with which Cleave navigates through the confusion.

As the title suggest, Trust No One in this tale. Don't trust Jerry and don't trust his Madness Journals. Don't trust his wife, his daughter, his friends, or his neighbors. Don't trust the doctors, the nurses, or the police. There are so many layers here, so many questionable confessions, so many red herrings, and so many answers that just don't last. It's a deliberately bewildering story (well-told, with an entertaining narrator, and some self-depreciating humor to balance the sorrow), and that is where the enjoyment lies.


Disclaimer: I received a complimentary ARC of this title from the publisher in exchange for review consideration.This does not in any way affect the honesty or sincerity of my honest review.
book review Paul Cleave thriller