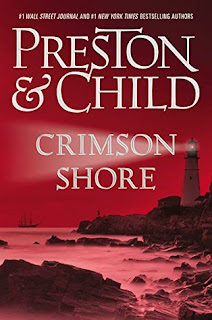 The first two-thirds of Crimson Shore were absolutely fantastic – the very definition of a page-turner. The Poe-esque hidden burial chamber, they mystery of the lost shipwreck, the terror of the mud flats and salt marshes, the forgotten community of Salem witches, and the creepiness of small town America all combined to provide the perfect Agent Pendergast story. It had plenty of atmosphere, a legitimate mystery, some dark humor, and even a bit of awkward romance.

Fully healed and completely recovered from his last few adventures, Pendergast is once again the fascinatingly enigmatic man-in-black with whom we are most familiar. His eccentricities are on fully display, and his Holmesian knack for reading people is on point once again. While never quite infallible, the almost superhuman aspect of his character is back, both mentally and physically. At the same time, Constance Greene is quickly developing into a leading character in her own right. She’s been displaying more personality in each book, but here she really steps into an investigative arc of her own. Her total lack of social skills, combined with her almost psychotic rage, is a perfect contrast to Pendergast’s polish and perfection.

What’s more, Constance has the opportunity here to be part of two equally awkward romantic entanglements. The weird sort of crush that Sergeant Gavin has on her is perfectly understandable, even if it does go completely off the rails later on. Far more interesting, however, is her romantic tension with Pendergast, a scenario that manages to be both sad and amusing.

As for the final third of the book, it’s as awkward and forced as anything Douglas Preston and Lincoln Child have ever written. It honestly feels as if they reached the climax, realized the story wasn’t long enough, and decided to tack on some supernatural adventure. What’s unfortunate is that it really could have worked, if only they’d made an effort to better integrate it with the rest of the plot. Yes, it's connected, and the false end of the original subplot is important to Constance's character, but the narrative link is tenuous, at best. As a standalone novella, I rather enjoyed it, but in the context of the rest of the story it felt tacked on, rushed, and (worst of all) artificially constructed to allow for another Pendergast-is-in-peril cliffhanger endings.

Maddeningly uneven, Crimson Shore is one of those books that I loved . . . and then hated . . . and then enjoyed somewhat ironically . . . and then just became exasperated with. I wish I could be as unreservedly enthusiastic about is as some advance readers, but it’s one structural edit away from being a truly solid Pendergast adventure.


Disclaimer: I received a complimentary ARC of this title from the publisher in exchange for review consideration.This does not in any way affect the honesty or sincerity of my honest review.
book review Douglas Preston Lincoln Child thriller