The Empire Strikes Back by Kameron Hurley (Guest Post)

on October 20, 2015
The Empire Strikes Back: Writing that Tricky Second Book
by Kameron Hurley

Second books in series get a bad rap. I understand why, of course: if you look at a trilogy as one work split into three parts, the second book is the gluttonous middle, the gooey stuff that you built up to in the beginning and that you must climb over to get to the end. If it’s not done right it can feel like you come into it swinging and get left hanging for a year or more until book three just to get some kind of resolution to the story. 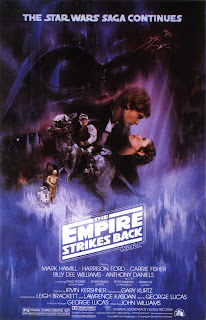 But I wanted to write a second book that was more like the middle installment of the original Star War trilogy, The Empire Strikes Back. For many, this was the best of the three films, and for good reason. You had happy go lucky characters get darker. You had some big reveals. Huge betrayals. Romance. And we got to see a whole lot more of the universe, too. Best of all, to me, was that the story did a great job of showing progress in the eventual character arcs that each hero would take. Luke starts to go darker, and gets the news that will eventually lead to us wondering if he’ll really choose the light over the dark. Han’s allegiance to the rebels over his own interest only grows as his burgeoning romance with Leia plays out. Leia herself gets a wrench thrown in her mission, as caring about Han only complicates things. When we leave that movie, we have the feeling that we have been through a lot of shit, and we feel some relief that it’s over, but we’re also at the edge of our seats, waiting for the next reversal. Knowing that all is lost, we turn our faces toward the third installment, waiting for the light.

You don’t get the great catharsis of the light without first going dark. That’s a rule. 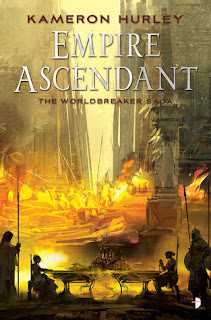 This was the feeling I wanted people to have after reading Empire Ascendant, the second book in my Worldbreaker Saga. If the first book is about saying, “Hey, here are some good people with terrible problems,” then the second should be, “These good people have been utterly destroyed by these terrible problems… but there’s a glimmer of hope.” It’s the glimmer of hope that you need to keep burning, of course, and I ensured I had that hopeful spark there at the end, when one of my protagonists, who’s been relentlessly beaten and broken throughout the course of the novel, declares that the fight isn’t over.

This isn’t a defeat, even if it seems like one. This is a regrouping.

And if you think that’s a spoiler, well, I’ll point out that the title of the book is, after all, Empire Ascendant. Yanno: Empire Ascendant, Empire Strikes Back… Hey, right? It’s like I do this for a living or something.

At any rate, just because this is what I aimed to do with this second book doesn’t mean it works for every second book. The second book in my God’s War Trilogy, Infidel, had its own self-contained story. Though it could be said those books have an overarching plot in the background that tells the story of the last fifteen or so years of what was a centuries-long war as it ground to a halt, each novel had its own plot and individual character arcs. It makes it possible to pick those up and read them out of order in a way that’s nearly impossible with the Worldbreaker Saga.

On the surface, that may look like the way to go, but I’ve found that there are a lot of readers who get annoyed at reading books out of order. I’d love to see the numbers difference between linked standalone novels and dependent series books, but I don’t have the data right now.

Until then, I’ll continue to experiment with writing different types of second books. On deck next is a book with no second book, which will be a nice change of pace for me. The Stars are Legion is a standalone space opera. I suppose my approach for tackling that one will be the same as how I tackle any other book. At the end of the day, you just sit down and write the best book you can in the time you’ve been given, and hope that people dig it as much as you do.

What I know for sure is that, as with any novel, things in it will get a whole lot worse before they get better. What’s the joy in winning, after all, if no one ever doubted you’d make it?

Kameron Hurley is the author of The Worldbreaker Saga and the God’s War Trilogy. Hurley has won the Hugo Award, Kitschy Award, and Sydney J. Bounds Award for Best Newcomer; she has also been a finalist for the Arthur C. Clarke Award, Nebula Award, the Locus Award, BFS Award, the Gemmell Morningstar Award and the BSFA Award for Best Novel. Her short fiction has appeared in Popular Science Magazine, Lightspeed Magazine, Year’s Best SF, The Lowest Heaven, and Meeting Infinity. Her nonfiction has been featured in The Atlantic, Locus Magazine, and the upcoming collection The Geek Feminist Revolution.

The Mirror Empire by Kameron Hurley

"What Kameron Hurley has crafted here in the first book of The Worldbreaker Saga is definitely different, even challenging in places (I found myself fighting to catch up and find my place more than once in the narrative), but what I took away most is the feeling of being completely awed by the depth of her imagination. This is an epic fantasy in the truest sense of the term, with some really stunning ideas on gender, roles, and relationships; all set within a naturally hostile, almost post-apocalyptic environment; and framed by an intricate theory of mirror worlds and alternate realities."


Read the rest of the review here

"Although this is a second (or middle) book, things actually happen here. With the world, the scenario, and the characters already established, Hurley is free to focus on the action – and she delivers that in spades. This is a fast-paced tale that carries a sense of urgency from page one. You can feel the tension oozing off the page as the characters clash, cultures collide, and worlds approach an end. The plot develops as much, if not more so, than in the first book – and not always in ways you’d expect."


Read the rest of the review here