on October 18, 2015
Any Top ten list is going to be an interesting because for me it says more about the person making the list than it does about the items in it. Lists like this are rarely based on talent or cultural meaning, instead focusing on individual tastes. Also, lists simultaneously have a huge amount and very little to do with who I am as a person right now: a huge amount because the items on any list have shaped me into the person I am today, but also little because if I were to discover the books for the first time now, they’d mean something completely different than what they meant when I actually discovered them.

I’m sure there is a book in my history that will explain my love of rambling.

1. The Harry Potter series by JK Rowling
I’m starting this list by breaking the rules. Instead of choosing one book, I’m choosing seven, because I couldn’t only pick one of them. I love each of the Harry Potter books for different reasons, and each one shaped a love that made me a writer in the first place. I fell in love with these books and in doing so, fell in love with writing. There is a magic in the Harry Potter series that escaped the books and bewitched millions. I’m lucky enough to be one of the people hit by that spell and all the better for it.

2. The Great Gatsby by F. Scott Fitzgerald
I first read The Great Gatsby in High School. I had a habit of ending up hating the books we read for class because I absolutely detest those ‘discuss how the use of red symbolises passion’ assignments. Sometimes, a fire is just red, alright? The Great Gatsby wasn’t like that for me. I love the character of Nick Carraway, and his influence in the narrative was a big inspiration when it came to Georgianna’s involvement in the Out of Orbit story. I didn’t want her to be at the centre of everything all the time. I wanted a bit of that outside view that Fitzgerald writes so wonderfully. I also love the moral greyness of the characters. It’s just always stuck with me, and I reread this regularly.

3. Wicked by Gregory Maguire
I adore what Gregory Maguire has done with his books, turning well known tales on their heads. I love his delving into the so-called villains of these stories and making you feel for them far more than you felt for the original hero/heroine of the story.
I also adore the musical!

4. Water for Elephants by Sara Gruen
This book is beautiful and I love that it was originally written during NaNoWriMo (of which I am an annual participant.) The detail and description that went into recreating a traditional circus is so well done. I was completely lost in this book. I think I got through it in a single sitting and a missed night of sleep.

5. My Sister’s Keeper by Jodi Picoult
Whatever you do, don’t watch the movie! The movie didn’t even begin to delve into the intricate and painful back stories of the characters, nor did it break the surface of the impossible situation this family finds themselves in. I can’t read this book without sobbing openly every other chapter.

6. The Catcher in the Rye by J.D Salinger
Another High School book I ended up loving, though this one I didn’t fall in love with until I reread it a few years after I’d left school. Like with The Great Gatsby, I love the moral comparability of the characters. I can’t exactly say why this book speaks to me the way it does, but I love it.

8. The Hunger Games by Suzanne Collins
The Hunger Games was brilliant in so many ways, not least because it didn’t shy away from the horror of what it was accomplishing in the way some YA books do. The characters were excellent, complicated, and real. The Games original and horrifying.

9. A Time to Kill by John Grisham
This is one of the few books that I read after seeing the movie. I adored the movie and so I wanted a deeper look. The book was even better, and though I don’t regularly read legal thrillers, I devoured this one. The topic is harrowing and very real. It’s almost painful to read at times, but it makes it all the better.

10. The Lottery by Shirley Jackson
This isn’t a book, but a short story, but it means so much to me that I can’t leave it out. This, to me, is one of the standards that short stories should aspire to. It’s such an intricate and perfectly crafted tale that gains meaning with each reading. I spent an entire year of my degree studying short stories, trying to write my own, and this will always be the standard I hold short fiction against.


So, there they are, my top ten books/stories. I’m slightly surprised by the fact I don’t have any Science Fiction books are on there, and there are a couple that I would add if I had a longer list. But these are the stories that stuck with me the most, the ones that continue to influence my writing. 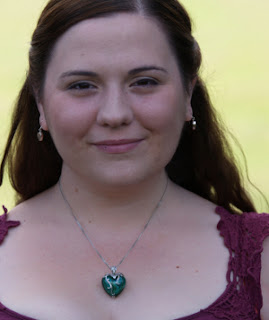 While some know they want to write stories since childhood, Chele first started writing as a teenager writing fanfiction and roleplaying. Before long playing in other people's worlds wasn't enough and she started creating her own. Living in San Francisco at the time, she found a lot of inspiration in her favourite city, some of which can be found in her books.

With a degree in Creative Writing, Chele's first novel was published in 2013. She currently has three books published: two books in a sci-fi series, Out of Orbit, and the first book of a vampire serial, Teeth. 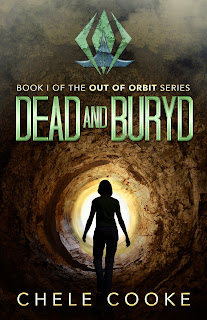 “You are an inmate, not a medic. You should get used to that.”

On the planet Os-Veruh, the native Veniche have endured a decade under the oppressive rule of a race of invaders, the Adveni.

When Georgianna Lennox, a Veniche medic, discovers her childhood friend has been sold into slavery, she seeks help from a revolutionary outlaw group.

As Georgianna’s struggle to save one life ignites a battle to liberate her homeworld, is she about to discover that it is better to be dead than ‘buryd’? 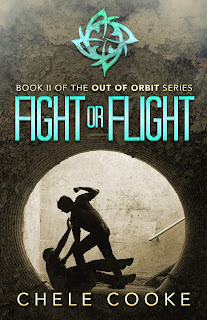 “This is nowhere near over. This is just the beginning.”

Georgianna Lennox is now a slave, serving an Adveni master and caught in the middle of a brewing war between oppressors and insurgents.

As the rebels increase their attacks against the Adveni, Georgianna is recruited as their eyes behind enemy lines.

But the lies she is forced to tell her owner are nothing compared to the secrets she must keep from her friends.

Secrets that could change the war in their favour, and lies that might destroy them all. 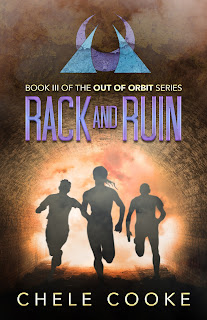 “You ready to break out of the cage, little bird?”

Georgianna Lennox has been released by her keeper Edtroka, who has sided with the Cahlven, a technologically advanced race exiled from her home planet hundreds of years earlier.

When Edtroka disappears, Georgianna and a group of rebel friends are forced to embark on a dangerous scouting mission behind enemy lines.

As the Cahlven’s true intentions become clear, Georgianna and the rebels hatch an audacious plan to turn the Adveni’s most powerful weapon against them — at a terrible cost.

As part of the OUT OF ORBIT blog tour, you can win a collection of Chele Cooke’s paperback books, including the entire dystopian OUT OF ORBIT series to date, and the first instalment of the paranormal thriller TEETH series.

Out of Orbit Giveaway

You can also share this giveaway via social media, and will receive extra entries for every friend who enters through your special link.