Waiting On Wednesday: Voices of the Damned by Barbie Wilde

on September 02, 2015
"Waiting On" Wednesday is a weekly event, hosted by Jill over at Breaking the Spine, that spotlights upcoming releases that we're eagerly anticipating. 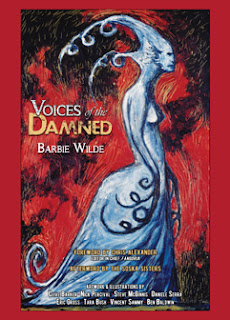 Enter into the mind of Barbie Wilde, whose disturbing interior world teems with the voices of rebellious female demons, devilish witches, semen-hungry neo-vampires, raging gods and home invaders, the fiends of sleep paralysis, pint-sized store-front preachers with a whiff of sulfur, body horrors of the most grotesque kind, clandestine aliens and Zulu zombies.

These truly are the Voices of the Damned: eleven short horror stories from Barbie Wilde, actress (Hellbound: Hellraiser II, Death Wish 3) and dark crime-horror novelist (The Venus Complex). Fangoria has called Wilde “one of the finest purveyors of erotically charged horror fiction around.”