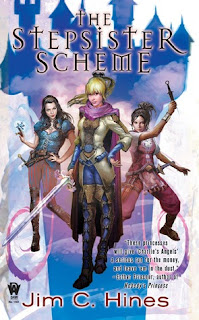 While I'd had The Stepsister Scheme on my radar for while now, it was only because of Jim C. Hines social presence that I finally decided to give it a try. Whether he's poking fun at fantasy cover poses, talking about important topics like depression and diversity, or demonstrating the absurdity of the sad puppies mess, he's a clever geek a with a good head on his shoulders.

I wanted to like his fiction, and it may be that I just picked the wrong book to begin with, but The Stepsister Scheme fell flat for me. It was OK . . . a half-decent way to pass the time on the train or at the park . . . but it never really excited me or engaged me. In terms of subject matter, it reminded me a bit of early Mercedes Lackey, but without her dramatic narrative flair. I guess it was all just a bit too simplistic for me, a cute story that settled for a serviceable telling.

For those not familiar with the book, Hines looks at what happens after the fairy tales end, giving us a world where there are no simple happily-ever-afters. When Cinderella's husband is kidnapped by her ugly stepsisters, Snow White and Sleeping Beauty swoop in to help save the day. Unfortunately, what could have been a kick-ass tale with the spirit of Xena behind it is, instead, a much weaker sort of book that's more reminiscent of the comedic reboot of Charlie's Angels. That sarcasm and wit that I've come to appreciate in his blog posts is missing here. What's left is fun in small doses, but entirely too light and fluffy to work as a full-length novel.

If you're new to fantasy, prefer fairy tales to epics, or are more inclined to YA/NA fiction, then you might very well enjoy The Stepsister Scheme. I can see the appeal, it just didn't work for me.