on August 07, 2015
As promised, I've sat down, dedicate my reading to the last batch of titles in the Great Self-Published Fantasy Blog-off, and collected my thoughts.

Once again, I committed to reading the first 50 pages (at a minimum) of each title, with the hope that one or more books in the batch would be strong enough to keep me reading right through the end. This time around there were 3 titles that kept me engaged to the end, which is a nice way to end this round.


Annie Bellet – Avarice
An interesting concept, but the execution just didn't do it for me. What we have here is a typical police procedural transplanted to a 'light' fantasy setting. It feels as if it could have worked better as a more typical urban fantasy tale. Overall, it just felt too thin for the material, without the depth of world building and imagination I look for in fantasy, or the depth of mystery I look for in a good police procedural.


Kelly Russo – Dreamweavers
This one turned me off from the start, forcing me to go back to the source file, change the atrocious font (stylized, all caps, like a teenage girl's diary), reconvert it, and then reload it for a read. Unfortunately, the text that was revealed did nothing to draw me in. First person narration is tricky, and while it can be done well, it quickly wears thin when it seems like every sentence begins with "I [something]."

JD Hallowell – Dragon Fate
An all-round solid read, this was paced well, with great characters, an intriguing world, and a plot that flowed naturally from the opening scenes. I did put it down a few times, before coming back to enjoy the read, so I feel compelled to caution new readers that it's not the classic sword-and-sorcery adventure you're expecting. It's far deeper, more philosophical, and more focused on character interactions than grand quests or epic battles.

Fortunately, our pair of mismatched heroes are a novel twist, including a retired soldier and his dragon. Before you cringe and start wondering how long before the novelty wears off, Hallowell establishes the characters, builds a bond, and makes them just as compelling as any warrior/sorcerer or barbarian/thief duo. Delno is a fantastic character, a hero who is more than capable of carrying a story, while Geneva is a character with far more personality than you'd expect in a dragon.

If I were to have any complaints, it's that the dialogue is a bit stilted and awkward at times, and that the actual plot development is more subtle than significant. It's a story that needs to be read closely, at a leisurely pace, in order to be properly appreciated. I don't always have that kind of patience, but in this instance it worked.

James Gawley – Legionnaire
More historical than epic, this is a heroic Roman fantasy, updated and re-imagined with a few more fantastical details than even the classic myths have to offer. It's a violently sophisticated sort of story, full more of political backstabbing and familial responsibilities than heroic deeds. Primus Seneca is a fitting protagonist, giving us a glimpse into the very unglamorous world of ancient Rome. He's not very heroic - in fact, he's rather dull and boring - but he does take responsibility for his place in a tedious, yet challenging, situation.

As introductions go, I certainly enjoyed it, but I'm not sure I'd be inclined to continue with the series. There's a spark or a sense of flair that's missing here, that little bit of stylistic oomph that catches your attention and compels you to keep reading. It's a serviceable enough narrative, but it often feels flat and matter-of-fact, without any real sense of excitement. I do wonder where it's going, but not so much that I'm eager for a sequel.


Siana Wineland – Emergence
There's nothing really wrong with this, and it would probably work very well for a different reader, but it's far too much contemporary science fiction when I was looking for something more . . . well, fantastic. The idea of a mutation bringing about such drastic changes as wings sprouting from your back and telekinetic abilities leaping into your head is interesting, but I found myself turned off by the bland, contemporary settings. What might have worked as a post-apocalyptic fantasy or cleverly satirized dystopia just falls flat here. What's more, there didn't seem to be any serious discussion as to how or why our race began mutating in such a drastic way, which is a philosophical aspect I need to make such a story compelling.

Greg Dragon – Re-wired
This turned out to be a very different novel than I expected, and I liked that. After all, the whole idea of using androids to explore issues of identity, emotions, slavery, and more has been done to death by this point. Whether you take the Star Trek approach or the Twilight Zone approach, readers come into such stories with an expectation as to where they're going to be led. Dragon does explore those themes, but it's the twists and additional layers to his story that make it compelling.

While I wish he'd been developed differently, there's no question that the story works so well because Brad is such an unlikable, unsympathetic character. He's not a pervert, a scene-chewing villain, or a selfish monster, just a lonely man who doesn't always make the best choices. By contrast, Tricia looks and feels far more human, and it's her role in the story - alongside that of Priscilla, the 'real' woman - that carries us along despite Brad's weaknesses.

What ultimately makes the story work, however, is the twist around the halfway mark when both women disappear from his life. How and why is a mystery central to the tale, with the resolution a genuinely rewarding surprise, ultimately making this more than 'just' a novel about robots, feelings, and humanity. It could have benefited from more tech-speak, to explain and ground the sci-fi aspect, but that's a personal curiosity, and not a commentary on the plot.

CONCLUSION: Another tough choice this time around, but I have to stick with the kind of fantasy that appeals to me the most, that resonates most deeply in my imagination, and entertains me at the highest level - and that would be Dragon Fate. 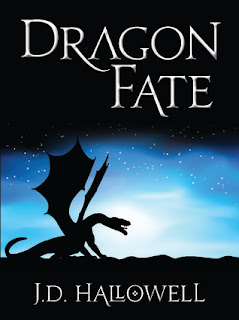 I want to let J.D. have the spotlight for the day, but check back this weekend for my first round champion.
epic fantasy historical fantasy sci-fi SelfPubFantasyBlogOff