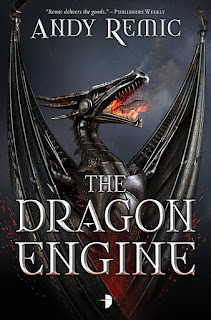 Although it shares the same world as The Iron Wolves and The White Towers, Andy Remic's first book in The Blood Dragon Empire is an entirely different. While those books were very much high-stakes epic fantasies, complete with massive battles and bloodshed, The Dragon Engine is more of a traditional quest tale - albeit one that subverts the usual tropes.

For starters, our heroes seem to be the typical gang of adventurers - complete with barbarian, archer, cleric, assassin, and more - but they're actually retired war veterans whose quest days are comfortably behind them. As it turns out, one of them is dying of cancer, one is drinking his sorrows away, and several are nursing broken hearts. While all but one would have turned down an adventure based solely on greed, they find a common purpose in seeking out a magical cure for their dying companion.

While you don't need any prior knowledge of the two Rage of Kings novels to enjoy this, fans will be pleased to discover that King Yoon is still in control, and as debauched as ever. He has serious competition for the most over-the-top, scene-chewing villain however, in the form of First Cardinal Skalg, High Priest of the Church of Hate. While the Dwarves here are hearty and stoic, as you'd expect, they're also sadistically prejudiced against the surface, exceptionally cruel, and on the brink of civil war. They're also presumed long-extinct, which poses a challenge for our heroes, who intend to help themselves to their forgotten treasures.

Where the story takes a sharp left turn in terms of both plot and tone is in the second half of the novel, following the heroes arrival beneath the mountain. What began a fun adventures becomes very dark, very quickly, as our heroes are taken captive. Without saying too much, the torture they endure at the hands of the Dwarves is not for the squeamish - it's cruel, it's painful, and it crosses lines that will make some readers very uncomfortable. What's important is that it's not done merely for shock value. Remic has established his heroes, exposed their faults and their flaws, and also pointed out their all-too-human weaknesses. It's important that they be tested, if not broken, if they're to shake off the complacency of retirement and become the heroes that the world needs once again.

The final chapters are some of the most powerful Remic has ever written, with the core conflicts coming together in a climactic clash. It is here that the true significance of the The Dragon Engine comes clear, leaving us with a cliffhanger that poses a dire threat for the world above. It is a very different story arc than the Rage of Kings, but readers who appreciate a more mature, more adult, no-hold-barred kind of fantasy that rivals any big screen R-rated action flick will once again find a lot to enjoy here.

Bring on Twilight of the Dragons!


Disclaimer: I received a complimentary ARC of this title from the publisher in exchange for review consideration.This does not in any way affect the honesty or sincerity of my honest review.

Thanks to the awesome gang at Angry Robot Books, we have five (5) copies of The Dragon Engine to giveaway to some lucky readers (winner's choice of paperback or e-book). Enter below . . . and good luck!