on August 03, 2015
Damn. There was a time when Dean Koontz stood tall alongside Stephen King and Clive Barker as a cornerstone of my horror collection. Over the years, however, I noticed his stories deliberately shift away from the dark weirdness and explicit horror that was so compelling to me. Eventually, I stopped picking up every new release, and started cherry-picking the ones that sounded interesting. I think it was that distance from the material that allowed me to step back and view his work with a more critical eye, ultimately realizing he'd descended into his own sub-genre of suspenseful, message-laden, clichéd morality tales. 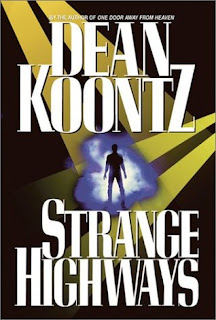 It was the Strange Highways collection, more than anything, which finally crushed that eroded cornerstone into dust. There were some stories in it that reminded me so much of his older work, I found myself getting excited again - and then I discovered Twilight of the Dawn. If there is one work above all others than demonstrated how far he'd fallen for me, one story that abandoned all attempts and subtlety and beat you over the head with the message that God is Good, that was the story. If you haven't read it, it's basically about a man whose atheism is responsible for all the tragedies that befall him and his family, and who is 'saved' by a pair of miracles.

I've tried to get back into Koontz a few times since then, with no success. Even when he's not falling back on his favorite tropes of special needs kids and adopted dogs saving the world through their purity and innocence, I can't escape simplicity of his villains. There's no moral ambiguity, no sympathetic aspect, and no sort of internal conflict. They'd be cartoonish in their stark blackness, if it weren't for the fact that they're so dreadfully heavy-handed. Find a character in a Koontz novel who doesn't believe in God and who engages in illicit kinky sex, and you've got your villain. I mean, he went so far as to take the archetype of the classic, morally ambiguous, sympathetically tormented villain, strip him of all of that color and depth, and instead present Victor Frankenstein as a man who is wholly evil and without moral direction because he doesn't believe in God. 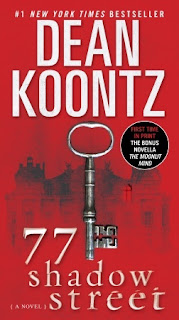 With all that baggage, you're likely wondering why I even gave 77 Shadow Street a chance. Well, the truth is, I wanted to find a Koontz book I could enjoy again, and a classic haunted house tale - with no room for one of those simplistic villains - seemed like a perfect choice.

This actually started off extraordinarily well, raising my hopes for a return to form. It was mysterious and creepy, full of WTF moments, and had an intriguing ghost story at its heart. The Pendleton was a fantastic setting, and its horrific history was perfect background for a contemporary ghost story. The plummeting elevator? Awesome. The blood-red water and sinuous shapes in the basement pool? Fantastic. The gigantic bug-like creatures seen only in shadow? Stunning.

Except, of course, that's not what this is. Koontz teases us for a long time, and really lays the supernatural evidence on thick, but eventually devolves into a messy sci-fi/horror mash-up involving time travel, alternate timelines, and dangerous experiments. I was disappointed, and came to resent the sci-fi intrusions, but was still willing to see where it went.

Unfortunately, the characters bring the story crashing down. For one, there are just too many of them for us to really be able to focus and care about their fates. The best of them are damaged, and the worst of them are those cartoon evil-doers who deserve their fate. There are no sainted doggies here, but two special needs kids who you just know are going to be pivotal. What began as a fascinating ghost story with some real narrative flair turned into a soap opera of character studies. We go from room to room in the Pendleton, from character to character, and basically wait for something to happen. I gave up somewhere in the second half when I looked back at the past 150 pages and realized a few characters made it down the stairs. Seriously, that was the sum total of plot development. All momentum was lost, and I just couldn't compel myself to continue.

I hate to say it, but I think I may be done trying to reconnect with my glory years. There are some authors who grow and evolve alongside you, and others who choose to take their development down a different path. Koontz and I, we're clearly on different paths, and I no longer see a crossroads ahead.