on August 25, 2015
Has there been a shift towards an edgier, sexier, more violent side of fantasy?

My fantasy novels are unashamedly edgy, often containing anti-heroes or downright villains as “heroes”. These characters are dangerous, realistic, violent, extremely violent, they often swear and fight and have copious amounts of sex. There are monsters who eat through spines, bite off heads, and are exterminated in bloody showers of bone, gristle and brain slop.

My own fantasy reading is currently David Gemmell, Joe Abercrombie and Richard Morgan. Abercrombie and Morgan especially are considered “edgy and violent”, and I’d argue Gemmell’s fantasy has its fair share of violent conflict – just look at dark characters like Waylander, Jarek Mace or even Druss. I’ve also recently been reading Monument by Ian Graham, which has a drunken vagrant as central protagonist (so hardly sexy, but definitely edgy and violent) and Richard Ford and John Gwynne also refuse to pull their punches in the edgy and violent stakes.

My childhood reading, the texts which influenced me to write fantasy during my formative years, began with Tolkien, followed by Magician by Raymond E. Feist, and these were soon superseded by Moorcock, Gemmell, and Peter Morwood’s The Horse Lord, The Demon Lord, The Dragon Lord and The Warlord’s Domain. I lapped up books like The War of Powers by Robert E. Vardeman and Victor Milan. I read the Split Infinity series by Piers Anthony, which flipped between SF and fantasy settings. There were the Spellsinger books by Alan Dean Foster, the Shannara books by Terry Brooks and the (now much criticised) Gor books by John Norman. I also imbibed the entirety of Howard’s Conan novels, and set about devouring anything by Robert Holdstock.

Now, some of my formative reading could be considered “tame” by today’s standards. What I’ve noticed predominantly is the change in language, with more explicit violence and definitely more explicit swearing. But are today’s novels really that much more edgy, sexier and more violent? Conan took zero crap from anybody, and his sword smashed enough skulls to bloody shards to give me violent excited dreams for months. Morwood’s books had the brooding, very dangerous (and very honourable) Aldric Talvalin as main protagonist, a man about as violent as one could write. As I mentioned, Gemmell’s work was filled with dark heroes and violence, the odd sex scene and some very edgy characters. Yes, the Shannara novels were as twee as the Tolkien books they so desperately wanted to be, but if you’ve read The Dancers at the End of Time by Moorcock you’ll know you can’t get much more decadent than the characters and situations therein.

Currently, there are a slew of edgy, sexy, violent novels, but there are also plenty of more traditional fantasy works, with authors like Juliette McKenna and Ian Irvine leaping specifically to mind. And that’s without mentioning the late, great Terry Pratchett, who achieved wonders in his books without “edge”, “sex” or even “ violence”. If this were a topic on a set of ancient weighing scales, I’d say the balance may well have tipped gently from one side to the other, but thankfully there are enough great writers out there to provide fantasy to satisfy everybody’s taste, no matter how much edge you want in your fantasy pie.

Andy Remic is a British writer with a love of ancient warfare, mountain climbing and sword fighting. Once a member of the Army of Iron, he has since retired from a savage world of blood-oil magick and gnashing vachines, and works as an underworld smuggler of rare dog-gems in the seedy districts of Falanor. In his spare time, he writes out his fantastical adventures

Get closer to the mayhem at andyremic.com. 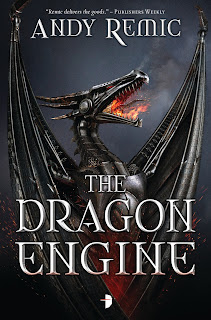 The Dragon Engine (The Blood Dragon Empire)
by Andy Remic

Five noble war heroes of Vagandrak get drunk one night and sign a contract – to journey to the Karamakkos in search of the Five Havens where, it is written, there is untold, abandoned wealth and, more importantly, the three Dragon Heads – jewels claimed to give unspeakable power and everlasting life to those who wield them.

But the Dragon Heads aren’t what they think, and the world has not encountered their like in generations!

Think Smaug was fierce? You ain’t seen nothing!

Thanks to the awesome gang at Angry Robot Books, we have five (5) copies of The Dragon Engine to giveaway to some lucky readers (winner's choice of paperback or e-book). Enter below . . . and good luck!