Waiting on Wednesday - The Pharaoh's Secret by Clive Cussler

on July 08, 2015
"Waiting On" Wednesday is a weekly event, hosted by Jill over at Breaking the Spine, that spotlights upcoming releases that we're eagerly anticipating. 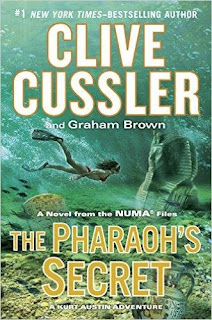 The dazzling new novel in the #1 New York Times–bestselling NUMA Files series from the grand master of adventure.

Kurt and Joe tangle with the most determined enemy they’ve ever encountered when a ruthless powerbroker schemes to build a new Egyptian empire as glorious as those of the Pharaohs. Part of his plan rests on the manipulation of a newly discovered aquifer beneath the Sahara, but an even more devastating weapon at his disposal may threaten the entire world: a plant extract known as the black mist, discovered in the City of the Dead and rumored to have the power to take life from the living and restore it to the dead.

With the balance of power in Africa and Europe on the verge of tipping, Kurt, Joe, and the rest of the NUMA team will have to fight to discover the truth behind the legends—but to do that, they have to confront in person the greatest legend of them all: Osiris, the ruler of the Egyptian underworld.


Clive just announced on Facebook this week that he's sent the final manuscript to the publisher, teasing "a ruthless powerbroker who schemes to build a new Egyptian empire as glorious as those of the Pharaohs." These books are always a fun read, and I'm a sucker for Egyptian archaeology, so consider the deal sealed!
adventure archaeology Clive Cussler Waiting On Wednesday