on July 12, 2015
Disclaimer: I received an ARC of this title from the publisher in exchange for review consideration. While I make every attempt to avoid spoilers, please be aware that an ARC synopsis, press release, or review request may disclose details that are not revealed in the published cover blurb. 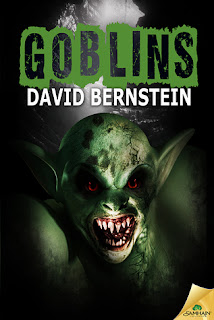 "Scraping noises filled his ears. Nail on bone. He knew it was the creature’s claws raking against the inside of his wife’s skull, cleaning it out and wanting every last morsel..."

If passages like that turn your face green and make you want to drop the book like it's covered in goblin slime, then you're likely not the right audience for this. If, however, such details make you hungry for more, then David Bernstein has put together a damn fine meal for you to enjoy with Goblins.

History buffs and mystery buffs will remember the story of the Lost Roanoke Colony very well. In 1590, just 3 years after arriving on the island, the entire colony of 115 settlers disappeared without a trace. The only clues left behind were the words Croatoan carved into a gatepost, and Cro carved into a tree. Popular theories blame it on either disease or natural disaster, but Bernstein has a better explanation.

This is a fun read with a great blend of supernatural horror and very human sorrow. Bernstein is a man who knows how to get under the skin and pull on the readers emotional strings, especially when dealing with children. We can all imagine the pain a family must endure when a child goes missing, but we can't even begin got imagine the horror of seeing that child come back . . . changed . . . and interested only in tearing you to pieces and devouring your flesh. I loved the way the kids sort of rippled, allowing their parents to glimpse the goblin beneath, just before confusion gives way to terror.

Lest you think I've spoiled the entire novel, that's really just the set-up. While Bernstein could have settled for a creepy, unexplained monster tale, he instead delves deep to the history of the island and the mythology of the Goblin King to create something deeper. There's almost an urban fantasy feel to this, in terms of how/why the town has come under siege once again, and there's are a few very real-life sort of tragedies involving children that haunt the main characters, but all of that is draped in the bloody, slime-encrusted, rotten flesh-curtains of pure horror.

Goblins is grim, it's gruesome, and it's great reading.