on July 28, 2015
A week late but otherwise keeping to plan, I've had time to sit down and dedicate my reading to second-to-last batch of titles in the Great Self-Published Fantasy Blog-off.

Once again, I committed to reading the first 50 pages (at a minimum) of each title, with the hope that one or more books in the batch would be strong enough to keep me reading right through the end. Once again, there were 2 titles that kept me engaged to the end. 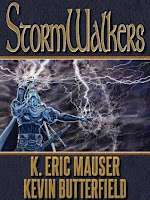 K. Eric Mauser & Kevin Butterfield – Stormwalkers
This was a solid, thoroughly enjoyable read with a lot of potential for future volumes. It had an epic fantasy sense of scope, some significant hints at greater world-building, and some very nice character development. I was a bit concerned at first that this would prove to be another coming-of-age tale, but it progresses at a good pace, skips over the scenes of tedium and boredom that are often substituted for 'character building, and focuses on the significant moments of Konal's life.

The copyright page indicates this was initially published in 1997, and it shows - mostly in a good way. It has a classic 80s/90s fantasy feel to it, not quite cheesy, but certainly enamored of the genre's most hearty tropes. Where the book floundered a bit for me was in its pacing. After a stellar, raucous opening, full of action and gorgeous magic, it pulls back, leaving the core plot for the second half. There are also a few early info-dumps that I found a little unwieldy, especially with the grand speeches and moments of awkward exposition, but that settles down before the end.


James Latimer – The Winter Warrior
This one, I'm afraid, just didn't grab me. It certainly has promise, and might appeal very much to a different reader, but it just fell flat for me. I didn't find myself warming up to the hero, which is important when the story begins with a mission of revenge, and I felt like too much of the bigger story and overall background was being help in reserve. It might all balance out and become clear before the end, but it just wasn't enough to

Brad Williams – Chadwick Yates and the Cannibal Shrine
Damn, but this was a lot of fun. It feels a bit lighter than I expected, and too often holds back from going all-out with the action and the drama, but has that episodic feel of an old adventure serial. As Brad himself says in the introduction, he has "written a story series to optimize both scope and action." This is a fast paced, rollicking read, and even if that comes at the expense of some character building at times, there's so much imagination you don't even notice.

Ironically, for such a fun bit of pulp, the story does get rather heavy-handed at times. It's not enough to derail the story, and it does serve to establish Yates' character, but it sometimes comes across as a bit too much. The world-building is solid, the narrative itself makes for a very easy, free-flowing read, and the characters are perfect for the tale - noble, heroic, and larger-than-life, but neither perfect nor infallible.


CV Dreesman – The Marksmith
I had a hard time getting into this, and an even harder time sticking with it. It felt rough and disjointed, almost like a first or second draft that needs an editor's touch to help smooth the flow and introduce some narrative bridges. It all just felt very abrupt, even confusing at times, and there wasn't enough character development early on to make me care enough about them to continue on.


Jay Swanson – Into the Nanten
I have to give Swanson full credit for the ambitious nature of his project. This novel was originally blogged in a 'live' format, as if the narrator were capturing his thoughts and experiences in a journal each night. It really sells that feel of a classic travelogue - which is either a good thing or a bad thing, depending on your tastes. Personally, that format just doesn't work. I like to get immersed in a story, to get lost in the narrative, and being bombarded by a series of single-page journal entries tends to wear on my patience. I liked what was there, and I can't deny the creative effort or the quality of writing behind it, but the format was a deal-breaker.

CONCLUSION: I'm torn on this one. I enjoyed both completed reads from this batch, and would recommend them without reservation. Ultimately, however, I think I have to go with the depth of substance over the flash of style and name Stormwalkers my winner this time out. There's a lot going on there, and a lot to draw in a new reader. Even if one or two aspects don't work, there are more than enough that do to balance it out and make for a compelling read. 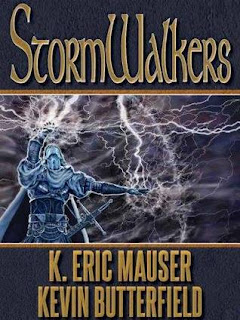