Waiting On Wednesday: Witches Be Crazy by Logan J. Hunder

on June 03, 2015
"Waiting On" Wednesday is a weekly event, hosted by Jill over at Breaking the Spine, that spotlights upcoming releases that we're eagerly anticipating. 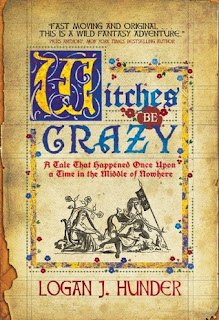 Witches Be Crazy: A Tale That Happened Once Upon a Time in the Middle of Nowhere by Logan J. Hunder
Expected publication: July 7th 2015 by Night Shade Books

Real heroes never die. But they do get grouchy in middle age.

The beloved King Ik is dead, and there was barely time to check his pulse before the royal throne was supporting the suspiciously shapely backside of an impostor pretending to be Ik’s beautiful long-lost daughter. With the land’s heroic hunks busy drooling all over themselves, there’s only one man left who can save the kingdom of Jenair. His name is Dungar Loloth, a rural blacksmith turned innkeeper, a surly hermit and an all-around nobody oozing toward middle age, compensating for a lack of height, looks, charm, and tact with guts and an attitude.

Normally politics are the least of his concerns, but after everyone in the neighboring kingdom of Farrawee comes down with a severe case of being dead, Dungar learns that the masquerading princess not only is behind the carnage but also has similar plans for his own hometown. Together with the only person senseless enough to tag along, an eccentric and arguably insane hobo named Jimminy, he journeys out into the world he’s so pointedly tried to avoid as the only hope of defeating the most powerful person in it. That is, if he can survive the pirates, cultists, radical Amazonians, and assorted other dangers lying in wait along the way.

Logan J. Hunder’s hilarious debut blows up the fantasy genre with its wry juxtaposition of the fantastic and the mundane, proving that the best and brightest heroes aren’t always the best for the job.


Damn, but I need to read this! It sounds like way too much fun to be trapped between the pages of a book, but from what I've seen so far, I think Hunder may just pull it off.
historical fantasy humour Logan J. Hunder suvudu