Waiting On Wednesday: Chasing the Phoenix by Michael Swanwick

on June 10, 2015
"Waiting On" Wednesday is a weekly event, hosted by Jill over at Breaking the Spine, that spotlights upcoming releases that we're eagerly anticipating. 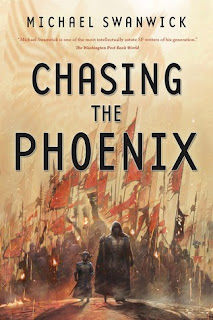 In the distant future, Surplus arrives in China dressed as a Mongolian shaman, leading a yak which carries the corpse of his friend, Darger. The old high-tech world has long since collapsed, and the artificial intelligences that ran it are outlawed and destroyed. Or so it seems.

Darger and Surplus, a human and a genetically engineered dog with human intelligence who walks upright, are a pair of con men and the heroes of a series of prior Swanwick stories. They travel to what was once China and invent a scam to become rich and powerful. Pretending to have limited super-powers, they aid an ambitious local warlord who dreams of conquest and once again reuniting China under one ruler. And, against all odds, it begins to work, but it seems as if there are other forces at work behind the scenes. Chasing the Phoenix is a sharp, slick, witty science fiction adventure that is hugely entertaining from Michael Swanwick, one of the best SF writers alive.


Even though this sounds like it could be a stand-alone read, the OCD reader in me will likely have to pick up a copy of Dancing with Bears, the first Darger & Surplus novel, before diving in. Fortunately, that one sounds like just as much fun.
historical fantasy Michael Swanwick sci-fi suvudu Waiting On Wednesday