on June 27, 2015
A busy week this time around with some interviews, guest posts, features, and reviews:
While I don't generally pay a lot of attention to stats, I found this interesting enough to share - the most popular post in the ruins this month has actually been my year-old review of The Last Town by Blake Crouch. Apparently, viewers of Wayward Pines are desperate to know how it all ends.

Okay, so I managed to go cold turkey on requesting any new titles . . . but I did let myself be tempted by two requests. In my defense, the first was a request from Ragnarok (a publisher I always have trouble saying 'no' to), and the second is co-written by one of the guys in Rush (as a Canadian, I feel honor bound to accept).

Derek Hawthorne was born to be an agent of the Red Room. Literally. Raised in a conspiracy which has protected the world from the supernatural for centuries, he's never been anything other than a servant of their agenda. Times are changing, though, and it may not be long before their existence is exposed.

When a routine mission uncovers the latest plan of the magical terrorist, the Wazir, Derek finds himself saddled with a new partner. Who is the mysterious but deadly Shannon O'Reilly? What is her agenda? Couple this with the discovery the Red Room has a mole seeking to frame Derek for treason and you have a plot which might bring down a millennium-old organization. Can he stop the Wazir's mission to expose the supernatural? And should he?

In Clockwork Angels , #1 bestselling author Kevin J. Anderson and legendary Rush drummer and lyricist Neil Peart created a fabulous, adventurous steampunk world in a novel to accompany the smash Rush concept album of the same name. It was a world of airships and alchemy, clockwork carnivals, pirates, lost cities, a rigid Watchmaker who controlled every aspect of life, and his nemesis, the ruthless and violent Anarchist who wanted to destroy it all.

Anderson and Peart have returned to their colourful creation to explore the places and the characters that still have a hold on their imagination. Marinda Peake is a woman with a quiet, perfect life in a small village; she long ago gave up on her dreams and ambitions to take care of her ailing father, an alchemist and an inventor. When he dies, he gives Marinda a mysterious inheritance: a blank book that she must fill with other people’s stories — and ultimately her own.

Clockwork Lives is a steampunk Canterbury Tales, and much more, as Marinda strives to change her life from a mere “sentence or two” to a true epic.


I also picked up a few used books this weekend to fill some gaps in my shelves. Michael Swanwick I want to read in anticipation of his upcoming release; Pocock & Pitt I've been hunting down since learning it was the basis for the TV series Adderly; Graham Masterton is fast becoming a favorite horror author; and Brooke Leimas I've been hunting down forever. 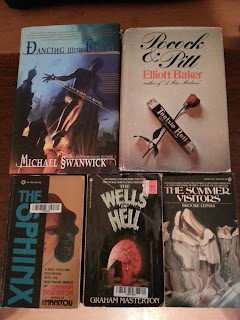 
• Shower of Stones by Zachary Jernigan
I was already curious after reading the first book, and excited after my chat with Zachary, but it's the opening bit of mythology building that has already won me over.

• Forge of Darkness by Steven Erikson
I was disappointed in The Crippled God, so I passed on this when it was first released, but I picked up the paperback in anticipation of Fall of Light and I'm enjoying it immensely.

• Grudgebearer by J.F. Lewis
I was in a mood for an old-school fantasy novel last weekend, so I started in on this. A bit confusing early on, but a lot of really cool ideas.

What's topping your shelves this week?
Canadian epic fantasy Mailbox Monday Stacking The Shelves urban fantasy What Are You Reading?