on June 20, 2015
A much busier week this time around with some promos, reviews, features, and a couple of solid reads from the Self-Published Fantasy Blog Off.

An exciting week coming up, as we'll be having Zachary Jernigan, Alyc Helms, and Jane Kindred stopping by.

Even after cleaning up the review pile and cosigning a few long-lingering titles to the DNF pile, I still have approximately 30 books waiting for my attention. We'll see how long I can stick with it, but my plan right now is to go cold turkey on requesting any new titles. If I'm good, Goblins will be the last title I request (the disappearance of the Roanoke Colony is too legendary to resist), and Damned Children of Naor will be the last title I accept (having enjoyed the first 3 volumes, I couldn't very well turn down the latest).

Damned Children of Naor by Justyna Plichta-Jendzio
Evil lurks everywhere and only waits for the opportunity to hunt down and devour the souls of its victims. It is all the same to the evil whether those souls belong to slaves, peasants, monks, nobles or kings. Every mortal must make a choice whether he wants to devote his soul to perdition or save it, even at the cost of life. This battle has been fought for millennia and its arena is every corner of Naor. Anyone can become a warrior and his main arms will not be a weapon forged by smiths’ hammers but faith given by the gods of lightness.

This time the goddess of fate chose Isilai, a merchant’s daughter from the far south, who was dreaming of traveling and leading a free life. The goddess’s finger also pointed to Sainal, a mercenary returning from wars to her lands. Valbern, an aide to a powerful lord Kolbren, has not been spared the test as well. Each of them had to face the evil. Did they decide to sacrifice what was the most precious in their lives to keep their souls away from hell?

Goblins by David Bernstein
They want the children!

Someone is taking children from their homes on Roanoke Island and gruesomely slaughtering their families.

After a small, hideous-looking creature is discovered at one of the murder scenes, Chief of Police Marcus Hale realizes whatever is responsible for the killings isn’t even human. Hale suspects a bizarre link to the past, to the end of the 16th Century, when the island’s first settlers disappeared, leaving only the word Croatoan carved into a tree.

But something far more sinister than he ever imagined is at work. And if it isn’t stopped soon, the entire island’s population will perish. Just like it did so many centuries ago.


My little guy and I did hit the Book Depot warehouse for a little book shopping and train watching tonight. Seriously, they have a track suspended from the ceiling over the kid's section with a model train that takes about 10 minutes to complete it's extensive path, complete with tunnels and bridges. Anyway, after chasing the train (he made us do it twice), I came home with a few new titles. 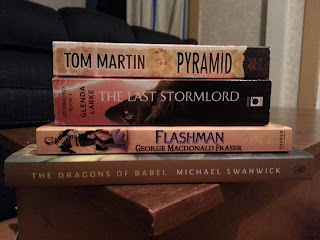 
• Wanderlust by by Adam Millard
Wizards, magic, necromancers, and thieves, all in a steampunk turn-of-the-century London.

• The Liar's Key by Mark Lawrence
Okay, I've patient, but since my review copy seems to be stuck in the mail, I went out and bought a copy at lunch. I've waited long enough - time to indulge!

What's topping your shelves this week?
epic fantasy horror Mailbox Monday Stacking The Shelves What Are You Reading?