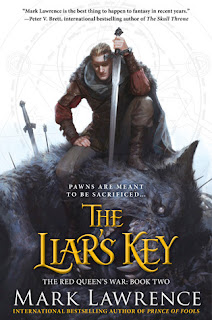 Wow, talk about a lot of pressure going into a book. Due to delays with Canada Customs and Canada Post, I was late (really late) getting my copy of The Liar's Key. By the time I cracked the spine I was already aware of a slew of 5-star reviews, and even if I tried to avoid reading them beforehand, I still knew many readers who were calling this Mark Lawrence's best work to date.

Yeah, as if my own expectations weren't already high enough!

The thing is, early on, I will admit to a few shadows of doubt. It's a bigger book than the first, in terms of both scope and page count, and I felt like the first half of it dragged on a bit too long. I still enjoyed it, but I found it slowly losing that can't-put-down, must-read impetus I remembered from his other novels. By the time I hit the halfway mark a week later, with Jal and Snorri going their separate ways, I actually put it down for a few days.

Of course, this is Mark Lawrence, and I knew that my pause wouldn't be an extended one. Call it an intermission (if you will) or a palate cleanser (if you must), but a few days later I picked it back up . . . and blew through the second half in 2 days. Yes, even if I have to stop shy of calling it his best - Prince of Fools will hold onto that coveted spot for at least a little while longer - it was still a fantastic read that turned out to be just as good as anything in the Broken Empire trilogy. In fact, I'd go so far as to say the final 100 pages rival anything he's written before, with a climax that may not be quite as frenzied or action-packed as in the previous books, but which is infinitely more dramatic, and entirely satisfying on so many levels.

Oddly enough, for a book that I expected to be very much about Snorri and his quest to bring his family back from Hell, this is entirely Jal's story. In fact, Snorri is almost relegated to a background character here, overshadowed by the likes of Tuttugu, Kara, and Hennan. While they're all great characters, each with their own legitimate roles to play in the overall drama, they're most effective in illuminating some of the more noble (and inconvenient) aspects of Jal's character. As much as he likes to style himself "a liar and a cheat and a coward," we see him slowly evolve through those relationships, fighting against his better side every step of the way.

At the same time, his blood-fueled magical flashbacks both expose his heart and scar his spirit, revealing the truth about his mother, the Red Queen, the Silent Sister, Edris Dean, and more. Whereas Lawrence has always used flashbacks to enhance the story, here he tells a significant chunk of it through those dreams. They don't always make sense in the moment, and it's hard to see exactly where they're going, but when the pieces all fall into place, it's magnificent. The moment when Jal realizes the truth of his family legacy, and just how it plays into the Dead King's schemes, is definitely one of the strongest, most impactful scenes Lawrence has ever written.

Of course, Jal's growth does nothing to absolve him of his more selfish thoughts, and those deeper revelations do nothing to interrupt his sarcastic, self-serving, narrative voice. Simply put, he's a fun guy to listen to, especially when he's whining and complaining about his fate. Even in the first half of the book, where I felt the pacing dragged, Jal's voice was sufficient to keep me coming back. As for the climax, it's that voice, and his own internal monologue, that drive so much of the final scenes. It's powerful stuff, and really serves to strip him bare and reveal the truth of his character, even as it brings the key plotlines of this volume to a close.

One final word on The Liar's Key - that final paragraph, those last 27 words, may very well be the greatest cliffhanger I've ever read. I gasped, I laughed, and I threw my first in the air, ready for the promise of The Wheel of Osheim to come.