on June 16, 2015
Disclaimer: I received an ARC of this title from the publisher in exchange for review consideration. While I make every attempt to avoid spoilers, please be aware that an ARC synopsis, press release, or review request may disclose details that are not revealed in the published cover blurb. 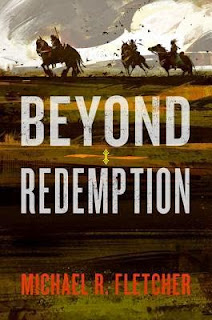 R. Scott Bakker. Steven Erikson. Peter Watts. When you think of dark, epic, mind-bending genre fiction from north of the 49th parallel, these gentlemen are the undisputed masters. It may be uncharacteristically bold and presumptuous to demand that a new name be added to that list so soon in his career, but I'll be damned if Michael R. Fletcher hasn't earned it.

Seriously, Beyond Redemption really is that good.


If our world is defined by delusion, there can be no truth. If there is no truth, how can there be lies?

When I first snagged an ARC of this about six months ago, I was definitely intrigued . . . but hesitant. Building an epic fantasy around madness, faith, and delusion sounded very cool. I was optimistic, but I also had my doubts. We're talking high-concept here, and I was worried that the narrative would suffer from the strain of trying to sustain the threads of madness. In fact, I'd almost talked myself out of taking that chance when, on a whim, I decided to give the first few chapters a cursory read. A few vulgar, violent, vehement exclamations of approval later, I was well-and-truly hooked. Beyond Redemption absolutely blew me away. It is indeed dark, grim, and gritty, but it's wild imagination is just as often manifested in moments of bleak, black humor. As for what it's about, this is the story of three men - one who would make a god, one who would steal a god, and one who would kill a god.


What is faith but delusion without the power to back it up?

Konig is the man who would make a god. As the High Priest of the Geborene Damonen, he is a proudly deluded theocratic ruler who, quite literally, is his own worst enemies. Beset by a trio of Doppels (doppelgangers) who represent his fears and insecurities, he's also victim of his own murderously rebellious reflections. Bedeckt is the man who would steal a god. An ailing, over-the-hill warrior who should already be dead, he's kept alive by the deluded belief that one last heist will change everything. He likes to think of himself as being the only sane man in a mad world, but the truth is that his delusions are just more subtle and integral to his personality. Erbrechen is the man who would kill a god. He is a fat, ugly, reprehensible madman, a Slaver by the power of his own delusions. He has merely to be carried through a town, to say a few words, and hundreds feel compelled to follow their new leader and best friend. By compelled, I mean hopelessly and helpless devoted to a man who, with a word, can rob them of the power to see, sleep, or shit, driven by nothing more than his desire for self-amusement.


In a mad world, only the mad are sane.

Before we talk any more about the characters or their deeds, I have to address the impressive level of world-building here. Fletcher spent a great deal of time inventing his world, creating the rules for its madness, and defining the outcome of each unique delusion. There are nearly twenty unique categories of delusion to his world, from Cotardists who believe they are dead (complete with rotting flesh and missing internal organs) to Somatoparaphrenics who believe portions of their body belong to someone else (causing limbs and organs to develop minds of their own). They are all defined by their inevitable pursuit of the Pinnacle, the point at which they truly lose their grip on reality, coming to be defined by their delusions, leaving them powerful enough to challenge the gods, but incapable of doing anything with that power. This is a world where the collective belief of a group of people can, quite literally, remake the landscape around them. It sounds bizarre - and it is - but Fletcher makes it all work, allowing the reader accept the power of madness as easily as we do that of magic and prayer in more traditional fantasy.


Damn this cursed sanity. How is being a helpless prisoner of reality sane?

Much to my delight, the characters here are all worthy of the story they've been asked to carry. If you don't get sucked in by the frantic madness of Konig, his Doppels, and his mirror images, then there's something seriously wrong with you. Here is a man arguing with multiple instances of himself, with those instances plotting against him. Aufschlag, his chief scientist, is the yin to his yang, the curiosity to his insanity. He's a man who has shaped the mad experiment of creating a god, but who has come to fear that his master is too deluded to be trusted with such devotion.

Bedeckt, Stehlen, and Wichtig are some of the most unusual protagonists to lead a novel, madly deplorable scoundrels who suffer each other's delusions while bantering and bickering throughout. Stehlen is a thief and assassin, a conveniently deluded Kleptic who cuts through plans as easily adn as thoughtlessly as she does anybody who gets in her way. Wightig is an man fleeing the responsibilities of his past, deliberately deluded into thinking he's the world's greatest swordsman, and just powerful enough in that delusion to convince others he just may be right.

Erbrechen is probably the thinnest character of the bunch, a plot device so powerful it's hard to make him seem human. He can be both comical and crazed, and there's no denying the fact that he's a dangerously egotistical megalomaniac, but he's also oddly vulnerable and desperate for the love of one true fried. Gehirn is the fire-scarred, powerfully deluded Hassebrand who falls in with his followers while marching home to Konig. Watching her fight again the power of the two men, wrestling with the revelation that Konig merely used her, while desperately wishing that Erbrechen's friendship were more than just delusion, is absolutely heart-wrenching.

Connecting them all, and driving the story forward is Morgen, the innocent, precariously balanced child who would be a god. He starts out as a tragic figure with terrifying potential, but grows and evolves even as his desperate innocence is tarnished and tainted. He, more than anybody, demonstrates the deft touch Fletcher has for characterization. They may all be deluded and damaged, far too bizarre for us to easily relate, but we care about them. We pity them, we fear for them, and we mourn for the inevitability of their fates.


The voices in my head just told me they were hearing voices. They said the voices wanted them to do something dangerous.

The pacing here is just about perfect, careening along from one scene to another with madcap intensity. There are moments of deep philosophical reflection, but they're part and parcel of the story, not asides or info dumps. The narrative is exceptionally strong as well, making use of two languages (English and German) to weave a story that flows across the page, even if it doesn't quite flow off the tongue. The action is intense, with beautiful moments of blood and brutality, and awe-inspiring feats of madness and delusion. Seriously, with the kind of power we're talking about here, you expect some truly epic feats of destruction, and Fletcher offers them aplenty. Most importantly, the grand finale pays off in every respect, bringing together all the various characters, themes, delusions, and events in a climax that defines epic. Of course, there's also a massive cliffhanger that offers a maddening tease of the sequel, but it does nothing to negate the ending here, instead opening up a new storyto come.

If you're at all curious, and are open to a story that challenges your intellect while delighting your imagination, then I urge you to give Beyond Redemption a read.