Delving Into Darkness by Jane Kindred (author of Idol of Blood)

Delving Into Darkness
by Jane Kindred

Idol of Blood is a dark fantasy. Let me qualify that by saying I don’t mean it fits in the genre of dark fantasy—it has no horror elements—well, mostly none. (Is that anything like “mostly dead”?) But as an epic fantasy with romantic elements, it has some seriously dark moments. This second book in my Looking Glass Gods trilogy deals with recovered memories of abuse, madness, loss, and revenge. Of course, there’s a fair bit of romance and erotica in the mix, so it isn’t all darkness, but I feel it’s only fair to let readers know what they’re getting into.

Because the original draft of this trilogy was a single volume—written in the halcyon days of just a few years ago when publishers were willing to buy 800-page epic fantasy—Idol of Blood doesn’t have the usual mostly-happy ending that my books are known for. In terms of classical dramatic structure, it’s largely the “escalating obstacles and rising action” piece of the story, with some temporary triumph mixed in with the darkest hour.

Idol of Bone, released this past February, is probably the lightest of the three, but it also has its fair share of dark elements. The story begins some 13 years after the prequel novella, The Devil’s Garden, and focuses on characters that were only peripheral to that story, which set the stage for the world of Looking Glass Gods. This is a world in which the rule of the godlike race of Meer is waning, and the magic of the Meer is no longer believed in.

While I was writing the last third of the original novel, I was reading Darkness, I, the final book in the late Tanith Lee’s Blood Opera series. It’s fair to say that reading Lee’s book colored my mood and encouraged me to go darker. (If you haven’t read her series, and if you like dark, sexy, subversive fiction, I highly recommend it.) I was also dealing with a dark time in my life. The character in Idol of Blood who recovers repressed childhood memories essentially unlocked my own as I was writing it. That element of the story isn’t in any way autobiographical—what happens to the character is beyond anything I experienced—but it was certainly a cathartic way to deal with the events I was remembering.

That catharsis included the revenge portion of the story. It was how I exorcised my personal demons. And I have to confess to having enjoyed writing many of the darker portions of the book—particularly the character of MeerShiva, who became a sort of personal goddess of vengeance and protection for me at the time. One reviewer for Idol of Bone described her as “creepy,” and I’d have to agree. But she channels her darkness, born of her own trauma, into unapologetic power. And that powerful darkness was something I needed to embrace in my own life.

The Looking Glass Gods trilogy starts out weaving—and then slowly unraveling—the threads of a mystery with Idol of Bone. The complexities of the plot and cast of characters can be a little daunting at first, but as another reviewer put it, “it all comes together eventually!” I hope adventurous readers will give it a chance.

“The second in Kindred’s tempestuous and fantastical series lulls us into a false security... When Kindred rips away the veil, we watch as violence and revenge duel for supremacy when the past rears its ugly head. Kindred does a splendid job of balancing the romance with a rapidly paced storyline and dark, unsettling revelations.” ★★★★ – RT Book Reviews 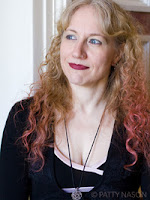 Jane Kindred is the author of epic fantasy series The House of Arkhangel’sk, Demons of Elysium, and Looking Glass Gods. She spent her formative years ruining her eyes reading romance novels in the Tucson sun and watching Star Trek marathons in the dark. She now writes to the sound of San Francisco foghorns while two cats slowly but surely edge her off the side of the bed. 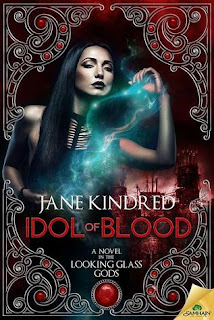 The price of revenge may be her sanity…and the lives of those she loves.

No longer haunted by memories of her life—and death—as the Meer of Rhyman, Ra looks forward to a quiet existence with her lover Jak in the Haethfalt highlands.

Having made peace with Ahr, her consort from her former life, Ra can finally explore her new relationship, free of the ghosts of the past—until she unwittingly unearths Jak’s own.

Out of instinct, she uses her Meeric power to heal the pain of Jak’s childhood trauma.

But all magic has a price, and Ra’s bill has come due.

Succumbing to the affliction inherent in her race, Ra flees to the mountain ruins where her mother’s temple once stood. As the madness takes hold, she resurrects the ancient city of AhlZel in a tremendous act of magic that seals her fate—and threatens to destroy those who would give up everything to save her from herself.