Horror Review: Through A Glass Darkly by Donald Allen Kirch 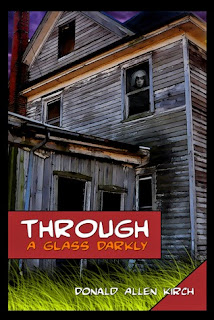 Sometimes we forget that the oldest, most classic horror stories are still the most effective. Put a stake in the vampires, take a shotgun to the zombies, and put the werewolves in a cage - haunted houses and restless ghosts never get old.

Donald Allen Kirch is an author who has previously demonstrated his love for the classics, but I'm not sure he's ever done so as strongly as he does in Through A Glass Darkly. This is a book that reaches far and wide for its inspiration, from the classic days of Poe and Lovecraft, through the cinematic days of The Amityville Horror and Poltergeist, and into the era of found footage and reality TV. It's a fun read, best suited for a dark and stormy night, but that's where the clichés end.

I'll be honest, I enjoyed the first half of this book the most. It's here that Kirch delves deepest into ghost stories and haunted house, especially when he exposes the lives (and gruesome deaths) of those who dared inhabit Manchester House before. These are chilling stories, offered up quickly, without the need to embellish, justify, or explain away the phenomena - and boy do they work! The journey through the forest just to get to the house is fantastic on its own, and details inside the house like the plastic tarps, dripping water, and dead rats in the kitchen really set the tone. The Other is most effective, for me, when she's experienced as a lonely, malicious sort of spirit, but I will give Kirch credit for coming up with an effective backstory for the house and its terrifying evil.

As much as the first half of the book is very much an homage to Poe, the second half owes most of its inspiration to Lovecraft. Here we move beyond the classic simplicity of a ghost or poltergeist spirit, delve deep into an impossible basement, and encounter the ectoplasmic tentacles of the monster that lies at the heart of Manchester House. It's a crazy, bloody battle against ancient forces of evil and supernatural god-like monsters, complete with a heroic shaman whose backstory is almost as powerful as his faith. I'll admit it, I tend to lose interest somewhat when these stories become all about the monsters, but the portrayal of Indrid Night kept me intrigued. I liked that Kirch just didn't make him some sort of renegade priest, but a self-made holy man who isn't above acquiring tools, weapons, and beliefs from multiple faiths.

Through A Glass Darkly is pure, straight-up, classic horror that completely delivers on its promise. It has just enough detail to make it smartly contemporary, but never strays far from the timeless horror of ghosts, haunted houses, and the damnation beyond.