on May 02, 2015
A nice balance this week, with lots of reading, our usual features, and even a few special guests:

Just one new addition to the shelves this week, but it's an exciting one. Aidan Moher is a blogger I've been following for years now over at A Dribble of Ink, so when he announced that he was self-publishing a collection of short stories, I was certainly intrigued. He'll be stopping by for a guest post on the 12th, and with his collection already in hand I'm hoping to have a review to run that week as well. 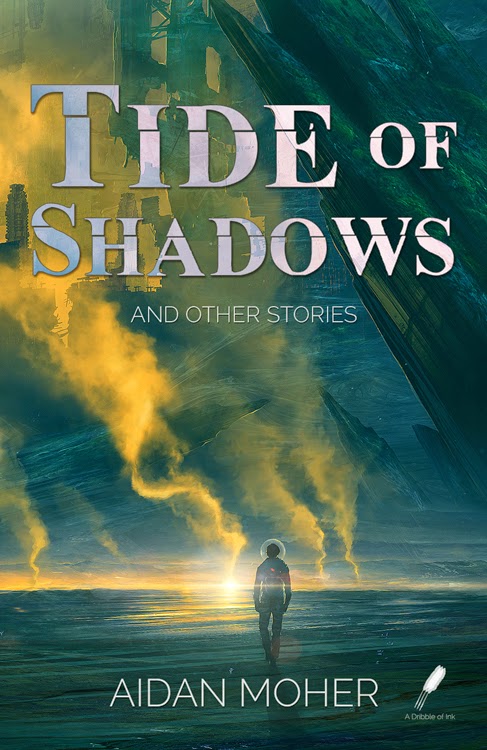 Tide of Shadows and Other Stories
by Aidan Moher

From Aidan Moher—Hugo Award-winning editor of A Dribble of Ink—comes Tide of Shadows and Other Stories, a collection of five science fiction and fantasy stories spanning adventure, comic whimsy, and powerful drama—from a star-faring military science fiction tale of love and sacrifice, to a romp through the dragon-infested Kingdom of Copperkettle Vale.

“A Night for Spirits and Snowflakes” is the story of a young man reliving the last moments of his fellow soldiers’ lives; “The Girl with Wings of Iron and Down” tells the tale of a broken family and a girl with mechanical wings; “Of Parnassus and Princes, Damsels and Dragons” introduces a typical prince, princess, and dragon—and a not-so-typical love triangle; “The Colour of the Sky on the Day the World Ended” follows a girl and her ghost dog as they search for a bright light in the darkness; and “Tide of Shadows” is about a soldier and his lover, a mother, and planetwide genocide.

I've admittedly been all over the map these past two weeks, with more titles on the go than are probably wise, but I'm in the mood for a bit of everything . . . and that's what I'm enjoying. On the plus side, there's going to be a killer glut of reviews coming.

• Kingdom of Darkness by Andy McDermott
Nina Wilde and Eddie Chase are back in their latest archaeological adventure. These novels are pure pulp, a mixture of Indiana Jones, James Bond, Dirk Pitt, and Frank Martin (The Transporter), complete with insane chases, explosions, treasure, and a whole lot of fun.

• The Dinosaur Lords by Victor Milán
Anybody who thought I could sit on this until closer to the release date is crazy! It's a book that gets off to a rollicking, dinosaur-laden start, with some of the most inventive battles I've ever read, interesting characters, intricate conspiracies, and a biting edge to the narrative.

• No Return by Zachary Jernigan
This is a book that somehow slipped by me when it was first released, but the blurb for the upcoming sequel caught my attention. It's a different sort of fantasy epic, a violent, sexually-charged, apocalyptic sci-fi/fantasy hybrid . . . and I'm enjoying it.

• Cattle Cult! Kill! Kill! by M.P. Johnson
This was going to be a WTF Friday read for this week, but too much travel, combined with the need to sit out on the back deck with a nice paperback (Kingdom of Darkness) conspired to push it out a week. Still, I'm anxious to see how Johnson follows up Dungeons & Drag Queens.

What's topping your shelves this week?
A to Z Challenge archaeology bizarro dinosaurs epic fantasy Mailbox Monday sci-fi Stacking The Shelves What Are You Reading?