Waiting on Wednesday: The Fifth Season by N. K. Jemisin

on April 15, 2015
"Waiting On" Wednesday is a weekly event, hosted by Jill over at Breaking the Spine, that spotlights upcoming releases that we're eagerly anticipating. 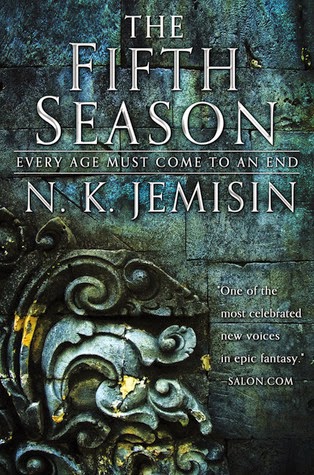 THIS IS THE WAY THE WORLD ENDS. FOR THE LAST TIME.

A season of endings has begun. It starts with the great red rift across the heart of the world's sole continent, from which enough ash spews to darken the sky for years. Or centuries.

It starts with death, with a murdered son and a missing daughter.

It starts with betrayal, and long dormant wounds rising up to fester.

And it ends with you. You are the Stillness, a land long familiar with catastrophe, where orogenes wield the power of the earth as a weapon and are feared far more than the long cold night. And you will have no mercy.


I already had this one on my radar, but after reading all this sad puppy bullshit regarding the Hugos, N. K. Jemisin had leaped to the top of my summer must-read pile. It sounds like a great story, I've been remiss in not reading her before now, and I admire the way she's politely and respectfully defended herself. Count me . . . and I hope I love it enough to piss off a whole litter of sad puppies! :)
epic fantasy N. K. Jemisin suvudu Waiting On Wednesday