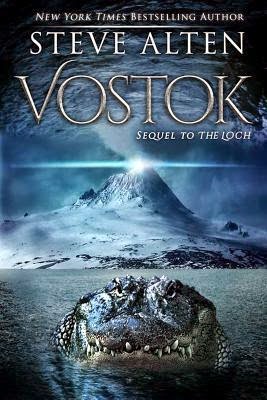 Good morning, all! Joining us in the Ruins today is a man who really needs no introduction . . . but I will do my best to provide one anyway. Steve Alten first hit the shelves almost 20 years ago with MEG, the first book of what would go onto be his bestselling Megalodon series, and he's never looked back. His latest, Vostok, continues the theme of that series (and, indeed, is a crossover tale), but gets a little darker and deeper into the shadows of government conspiracy.

Q: Thanks for taking the time to stop by today, Steve. For those who have yet to fall prey to MEG or dive into The Loch, please tell us a little about yourself and what we can expect.

High-octane adventure, woven with fact that makes you wonder what is real and what is fiction.

Q: The journey from 'aspiring' to 'accomplished' can be a long one, even in the era of small presses and digital publishing, but yours is almost storybook – I mean, you sold your car to pay for editing fees, then you lost your job, only to land a deal with Bantam Doubleday four days later. Looking back, how crazy was that whole experience?

It’s still a rollercoaster ride --  and I hate rollercoasters. The second part of that 2-book deal was abruptly cancelled, then the first MEG movie deal went sour after the president of Hollywood Pics was fired. Then we got a deal with New Line Cinema – only to have the rights reverted when management just didn't support what every dept. wanted.  Ups and downs, but hopefully another big rise soon.

Q: Your latest release, Vostok, connects two of your bigger storylines, serving as a sequel to The Loch and prequel to the 5th MEG novel, Nightstalkers. Was it always your intention to tie things together, or was there something else that drove the idea of a crossover?

The ideas came to me while I was writing the first draft. Here were two lead characters with so much in common, but polar opposite approaches. Jonas Taylor (MEG) aids Zachary Wallace (The LOCH), then the story continues in MEG: NIGHTSTALKERS.

Q: Vostok, of course, deals with prehistoric monsters, but what really caught my eye is the fact that you've also incorporated a UFO conspiracy angle this time around. How did that aspect come into the story?

Through the research. There’s a powerful electromagnetic presence coming from Lake Vostok – all very real. What could harness that much power? What’s it doing in a 15 million year old lake?  The mind reels…

Q: You’re known for being open and accessible to your readers, even going so far as to use them as characters in your work. In terms of reader reactions, what is the strangest or most surprising reaction to your work that you've encountered to -date?

Back in 1998, after MEG debuted, I received a hate-filled letter from a guy who seemed to have some writing ability, even though he was spewing venom. I replied that he seemed like a jealous, frustrated author, but I’d rather he verbally attack me than beat his wife. I also said that it’s too bad you’re so angry because I could use a good editor on The TRENCH. He responded with apologies – turns out he was a jealous writer, but said he’d love to edit. So I hired him and he did an outstanding job. His name appears in the acknowledgments.

Q: Wow, that's some twist! To turn from pen to page for a moment, is there a particular author who has influenced or inspired your writing? Somebody who either made you want to write in the first place, or who just refreshes your literary batteries?

I have favorite authors who have inspired me with their words and story-telling abilities. Ian Fleming, Bram Stoker, Kurt Vonnegut, Thomas Harris, Michael Crichton, Peter Benchley, Anne Rice… to name a few.

Q: Although you’re not marketed as a YA author, and your books have a broad audience appeal, you’ve made some significant connections with high school students across the US. How did you come to get involved with Adopt an Author, and what as the experience been like?

Shortly after MEG was released in 1998, I began receiving email from teens who hated to read… until they found MEG. Then teachers started emailing me, letting me know they were using the book in class. Then I learned MEG had been named a top choice for reluctant readers. My background is in education, and I saw an opportunity to help teachers and students. So I founded Adopt-An-Author. The non-profit offers free curriculum materials, tests, quizzes, vocab lists, book trailers, free posters, and everything needed to create a curriculum – along with direct communication between the authors and students via email, skype, and classroom visits. In 1998 we had about 7 registered teachers.  Now we have over 10,000 ! For more info, go to www.AdoptAnAuthor.com

Q: You’ve written multiple screenplays, so clearly you have a feel for the medium, and the books have already been optioned, but assuming you had total creative control over the production, who would you cast as the leading roles for the combined worlds of Meg and The Loch on the big screen?

Not touching that, sorry.

Q: Fair enough! Coinciding with the release of Vostok, you’re also releasing a revised 20th anniversary edition of Meg, which incorporates the Origins story. Had you always wanted to go back and revisit your debut so extensively, and do the edits have any impact on the rest of the series?

I had revisited MEG about seven years ago and did some fine tuning.  But when I added to never-before-published ebook prequel, the stories didn’t align – the writing in Origins was just so much better. So I spent the next three months rewriting MEG, adding scenes, changing certain characters, plus a new ending. Then I added the 17 best images I had accumulated over the years from top graphic artists. The result is a completely different read. There are only 5,000 books printed, each numbered. They can be purchased WHILE THIS ONLY SUPPLY LASTS at www.RebelPress.com

Q: Before we let you go, what can we look forward to from you next, beyond the 5th Meg book? Is there another crossover story to be told, or perhaps something completely different on the horizon?

A few exciting projects in the works. Plus new character contests for readers who want their names immortalized in print. Go to www.SteveAlten.com and sign-up for my free monthly newsletter to learn about these things first.

Awesome. Thanks again for joining us, Steve!

Steve Alten is the New York Times and International bestselling author of fourteen novels, including the MEG series about Carcharodon Megalodon, the 70-foot, 100,000 pound prehistoric cousin of the Great White shark and Domain trilogy, a series about the Mayan Calendar’s 2012 doomsday prophecy. His work has been published in over 30 countries and is being used in thousands of middle and high school curriculum as part of Adopt-An-Author, a free teen reading program, which he founded with teachers back in 1999.

East Antarctica: The coldest, most desolate location on Earth. Two-and-a-half miles below the ice cap is Vostok, a six thousand square mile liquid lake, over a thousand feet deep, left untouched for more than 15 million years. Now, marine biologist Zachary Wallace and two other scientists aboard a submersible tethered to a laser will journey 13,000 feet beneath the ice into this unexplored realm to discover Mesozoic life forms long believed extinct – and an object of immense power responsible for the evolution of modern man.

In this sequel to The Loch and prequel to the upcoming MEG 5: Nightstalkers, New York Times best-selling author Steve Alten offers readers a crossover novel that combines characters from two of his most popular series.