on April 21, 2015
With my review commitments call caught up for a couple of weeks, I finally had time to sit down, concentrate, and dedicate all of my literary attentions to the Great Self-Published Fantasy Blog-off.

After having discussed it with my fellow bloggers, and seeing what's worked for those who have already posted, I've decided to break down my reading list into batches of 5 books each. For each of those titles I've committed to reading the first 50 pages (at a minimum), with the hope that one or more in each batch will be strong enough to keep me reading right through the end.

Stoo Goff – Knights of Elevar
I thoroughly enjoyed this one. It helps that it's a rather short novella, at just 127 pages, but I was well into the latter half of it before I thought to check whether I'd passed the first 50 pages. The writing was solid, and the dialogue fit the characters as well as their world, which I've found is often a challenge in self-published fantasy. The pacing was just about perfect, which makes sense given that it was originally published as 5 short stories, although the format does make for some abrupt scene breaks that were a bit jarring in places. Overall, I thought the world building was exceptionally strong for the length of the tale, especially since Goff accomplishes it without info dumping on the reader.

Blair MacGregor – Sand of Bone
For a self-published title, I have to say this was quite astounding. There were a few rough passages in the early chapters, but MacGregor very quickly comes into her style, and those rough passages are few and fewer as the book goes on. In the space of a single chapter, Raskah is well-established as a villain worthy of the reader's disgust, eliciting strong emotions even though we have yet to even begin building connections to the other characters. Syrina takes a while longer to develop, and initially I was a bit concerned by how much of her seemed defined by her status as a victim, but she quickly blossoms and develops into a heroine worthy of her own almost-arrogant ideals.

The world building was a bit weak for me, only in that I find desert settings somewhat lacking in variety and creativity. That said, I think MacGregor did a fine job with the world she established, especially in terms of politics and family. The intrigues and machinations between family members are both complex and interesting, and they all have a purpose that goes beyond mere greed or ambition. In fact, it's only because of that emphasis on family intrigue that I was able to push myself past the middle of the tale, where the pacing stumbles over its own feet and slams headfirst into a wall. It does pick up again, thankfully, but that lull turned what had been a page-turner into something I had to force myself to pick up and read.

In terms of action, this is a violent, sometimes brutal read, but never without consequences, and never at the expense of the storytelling. It's a story that both begins and ends with such consequences, ultimately defining the tale and providing the kind of narrative balance that makes for such a solid read.


Rick Chiantaretto – Death of the Body
This one got off to a rough start and never really recovered. I found the writing awkward and stilted, without any real flow, and the narrator sounded far too confident and mature for his age. In addition, there was a lot of talk about religion (especially about Christ) that kept interrupting the story and just turned me off. (DNF)


Steve Muse – Heir of Nostalgia
I'm not generally a fan of coming of age stories (they've been done to death), so it's not a huge surprise that this didn't work for me. The narration is a bit bland, with short scenes that seem to jump around an awful lot, and I never warmed up to any of the characters. Not sure if the pacing picks up later, but there didn't seem to be much more than talking in the first 50 pages, and none of it engaged me enough to keep reading. (DNF)

The first thing that struck me about this is how well Lestrange sets and builds a scene. It's a very visual story, with starkly realized scenes full of smells, as well as sights and sounds. For a city-bound fantasy it's also a story with a fantastic level of world building, including history, mythology, and social evolution. The zereshi are a unique sort of race, somewhat cat-like with fangs and claws, but also with snake-like tentacles growing out of their heads. They're seen as a something less than human, a lower class of people, and Lestrange doesn't shy away from the horrors of such hypocrisy and injustice.

As for the story itself, there's a nice mix of urban fantasy, thriller, and adventure here. It's a tale of thieves, slave-traders, soldiers, merchants, prostitutes, executioners, and nobles. What begins with a heist, soon leads to a story of revenge, before expanding in scope and tension. Zîf, Kiana, Salin, Rana, Cirrin, and the rest of the characters are sharp and original, well-defined, and engaging. I'm not sure any of them could be described as particularly likable, but they are admirable.

If there's one weakness to the novel, it's in the pacing. Things start off quickly, before slowing down early on, and then picking up again around the mid-point. What ultimately redeems the pace, however, is the addition of a supernatural element that really brings out the best in the second half of the novel. Overall, it's a dark book, one with a lot of edge, but there are moments of humor to keep the story balanced. It could have benefited from a little editing, as it is somewhat longer than the story really can support, but I still came away from it having enjoyed the read.

CONCLUSION: Of the 5 titles I read this time around, I'm pleased to say 3 kept me reading right through to the end. Of the 3, I'm a bit torn as to which stands out as a clear winner, with both Sand of Bone and Black Silk impressing me, but I think I have to give the complexities of the former a slight edge over the imagination of the latter. 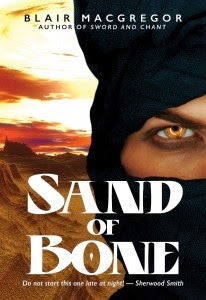