on April 27, 2015
Disclaimer: I received an ARC of this title from the publisher in exchange for review consideration. While I make every attempt to avoid spoilers, please be aware that an ARC synopsis, press release, or review request may disclose details that are not revealed in the published cover blurb. 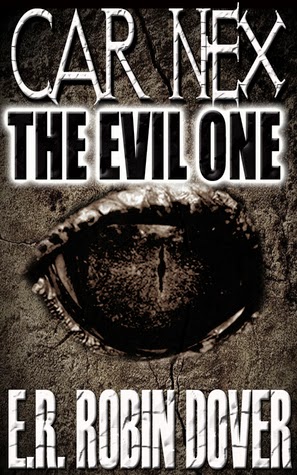 Car Nex (Carnivore from the Nexus) is a shared world/shared monster series created by Terry M. West, who has quickly become a favorite indie author here in the Ruins. You certainly don't have to read any of the previous Car Nex tales to enjoy this (it all begins with What Price Gory), but be prepared to find the tiles mentioned in the Forward creeping into your list of upcoming reads.

First up to put his own spin on Car Nex with The Evil One is E.R. Robin Dover. Unfortunately, it's a story that never lives up to its promise. It opens with some fantastic scenes that really do well to establish the characters and establish the scenario. We're presented with a husband and wife who have a very House of Cards style relationship, complete with an admission of adultery and honest suggestion of polygamy, but with a different sort of twist on faith and culture. We're introduced to a precocious young daughter who is both older and more mature than her years, and an elderly mother who seems to be losing her grip on reality.

On top of this, the mayor is involved in funding an underground terrorist movement, one that he's betrayed, and which appears to be deeply embedded in all levels of life - from schools, to government, to big business. When those terrorists come calling, demanding revenge for that financial betrayal, the elderly mother steps in to suggest that sacrifice is needed to prevent the larger loss of life. She gives the mayor access to the Car Nex, allowing him to summon the demon, and then gives her own life to feed its hunger for blood as it comes through into our world.

It's a shame that Dover seems so impatient to get to the end. Just as it's getting really interesting, we skip over all the details that would have made for a fascinating novel or novella. In a classic case of 'tell' rather than 'show', we're told the New York is at war, but it's not clear whose side the terrorists are on or precisely how it all started. We don't get to see how the terrorists launch the conflict, we don't get to see how citizens respond, and we don't get to see how the military becomes involved. What's more, we never learn the details of 'how' and 'why' it's all happening, what the terrorists want, or what the mayor expected. Similarly, we're told that Car Nex is devouring souls across town, but we don't actually get to see it happen, except in a few snippets.

It's a shame, because it all began so well, with such potential, and because the final scene makes for such a powerful climax. There's just so much missing, so much left off the page, that the gaps and the holes overwhelm the tale.