on March 25, 2015
"Waiting On" Wednesday is a weekly event, hosted by Jill over at Breaking the Spine, that spotlights upcoming releases that we're eagerly anticipating. 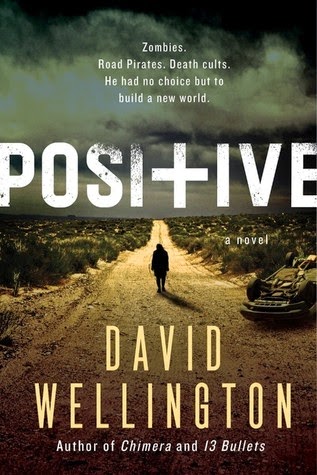 In the bestselling vein of Guillermo Del Toro and Justin Cronin, the acclaimed author of Chimera and The Hydra Protocol delivers his spectacular breakout novel—an entertaining page-turning zombie epic that is sure to become a classic.

The tattooed plus sign on Finnegan's hand marks him as a Positive. At any time, the zombie virus could explode in his body, turning him from a rational human into a ravenous monster. His only chance of a normal life is to survive the last two years of the potential incubation period. If he reaches his twenty-first birthday without an incident, he'll be cleared.

Until then, Finn must go to a special facility for positives, segregated from society to keep the healthy population safe. But when the military caravan transporting him is attacked, Finn becomes separated. To make it to safety, he must embark on a perilous cross-country journey across an America transformed—a dark and dangerous land populated with heroes, villains, madmen, and hordes of zombies. And though the zombies are everywhere, Finn discovers that the real danger may be his fellow humans.

Mad Max Beyond Thunderdome meets World War Z and I Am Legend in this thrilling tale that has it all: a compelling story, great characters, and explosive action, making Positive the ultimate zombie novel of our time.


Generally, zombies just don't do it for me, but this sounds like a very cool approach to the genre. It sounds strange to hear it described as Wellington's breakout novel when he already has a dozen titles on the shelf, but I hope it does thrust him into the mainstream. Despite my complaints about the last Jim Chapel adventure, I like his style, from what I've read (the ARC has been sitting on my Kobo since November), this should be great.
David Wellington horror suvudu Waiting On Wednesday zombies