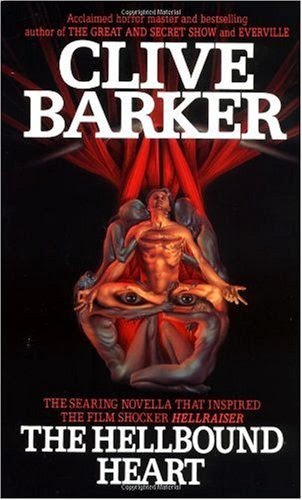 As I prepare to settle down and immerse myself in the long-awaited literary spectacle that is The Scarlet Gospels, I am going back and revisiting the original appearances of Pinhead and Harry D'Amour. As brilliant as Doug Bradley and Scott Bakula were in their respective screen roles, I want to recapture the essence of Clive Barker's vision, the magic of his words, and the subtle nuances that remained on the page.

Although The Books of Blood is technically where it all began, with Harry D'Amour and The Last Illusion, it's with The Hellbound Heart that Barker became an obsession for me. I actually had the pleasure of reading the novella just days before watching Hellraiser, and I remember how satisfying it was to see the story come alive on the screen, scene-for-scene, in the kind of faithful adaption that Stephen King would have to wait decades to enjoy.

To be fair, there are two significant differences between the two adaptations. The cinematic Pinhead has become a horror icon, a figure of fear and fascination alongside the likes of Freddy and Jason, but he only has one brief scene in the novella, and just two short lines. His iconic pins are actually adorned by jewels here, and he has "the voice of an excited girl," rather than the perfect baritone of Doug Bradley. Instead, it's The Engineer who serves as the face and voice of the Cenobites in the novella, although it speaks the same quotable lines, such as "No tears, please. It's a waste of good suffering," and iconic pledge to "tear your soul apart."*

The other significant difference is in the ending, with the film having more of a heroic sort of climax for Kristy, although I far prefer the creepy, haunting, final shocking scene of the novella. It places Julia in a bit of a different light, not quite redeeming her murderous adultery, but instilling her with a little sympathy and sorrow. [highlight to reveal spoiler] The image of a dirt-smeared bride, sitting amid the smoldering ruins of a family dining room, is vivid enough, but then that twist . . . with Julia's plaintive cries not coming from beneath the lush veil, but from the bride's lap . . . wow, does that ever bring the themes of the story home. [highlight to reveal spoiler]

Everything just works in this tale, from the characterization, to the plotting, to the themes, to the dialogue, to the visuals. It's a perfect length, as well, capturing the essence of Barker's tale with nary a wasted word or scene. For me, this was also the first work by Barker where the language of the narrative really made an impact, forcing me to slow down, detach myself from the story, and just linger over the word choices and construction of sentences. It's a horribly dark story, of despicable people committing atrocious acts, but so beautifully told, you really do come away with a proper sense of just how close pleasure is to pain, and just how wondrous the intersection of the two can be.

There is absolutely no doubt that Hellraiser is one of the finest horror movies ever made, but The Hellbound Heart rarely gets the literary recognition it deserves. It is, quite simply, one of the most perfect horror stories ever written.


*You can read about the fascinating evolution of Pinhead over on Barker's site.
book review Clive Barker horror suvudu