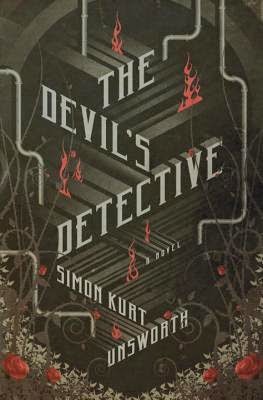 Clive Barker once wrote that “Hell is reimagined by each generation,” and, with The Devil's Detective, it is Simon Kurt Unsworth's turn to do the reimagining. His Hell definitely pays homage to the 'classic' vision, but is more about purgatory and hopelessness than actual punishment. It is a bleak and colorless slum, home to human sinners, fallen angels, demon masters, and all kinds of monsters. Far more dystopian ruin than biblical hell-and-brimstone, Hell is quite literally the ugliest, saddest city that you can imagine, torn asunder from the world, and buried beneath the cruel temptation of Heaven's light above.

Our guide in this underworld is Thomas Fool, an Information Man who is akin to the saddest, most hopeless of bureaucrats. His job is to report on the atrocities of Hell, and to catalog the brutalities around him, but not to investigate them. He's like a burned out police detective, but one with no memory of his life before, and no hope for anything better before him. A cold, largely emotionless protagonist (think a later season Stabler from Law & Order: SVU, but without the rage), he's fascinating, but not a character to whom we can relate, or for whom we can root. When he's ordered to actually investigate a crime in which a human corpse was found without a soul, we're curious about where his story might go, but even the most optimistic reader would be hard-pressed to hold out any hope for him or his case.

This is a hard book to categorize. Like Dante's Inferno, it's a book that's more about the place and the journey than the people within it. It's as fascinating as it is depressing, with visions of horrors and atrocities that will linger with you long after putting the book down. For instance, the flaming orphanage full of monstrous half-demon babies, abandoned by their human prostitute mothers, particularly sticks with me, as does the first attempt by real demon to rape, defile, and devour that soulless corpse.

What story there is here is part police procedural and part political/religious thriller. The twists and tweaks that Unsworth makes to the procedural genre were, for me, the most intriguing aspect of the novel. The increasingly darker, more sinister, more carnivorous scenes with the Man of Plants and Flowers are remarkable, especially as we come to understand this mysterious informant is far more than just that. The scenes with Hell's coroner (think a bizarro, gothic take on Ducky from NCIS), who tests for souls using feces-encrusted communion wafers, are as unsettling as they are amusing, and the hopeless banter between Fool and his two fellow investigators is almost tragic, but one of the few threads of true humanity we find in the novel.

On the religious/political side, we're set up for something unusual at the very beginning, when Fool is commanded to escort a delegation from Heaven, who have come for the random selection and escalation of damned souls. These angels are as cruel and arrogant as any demon, and it's clear there are ulterior motives to their every action. The rulers of Hell have, of course, ulterior motives at every turn as well, and their reasons for ordering Fool to actually investigate a human murder are far more about self-preservation than justice. As for the riots that eventually ensue . . . well, I won't betray the secrets there.

Narratively, this is a very dense book, full of description and exposition, and not a lot of dialogue. It does tend to get very bogged down in words at times, and the often strained play on the name 'Fool' became a bit tiresome, but the imagination behind it all is what kept me reading. It's a book that will challenge a lot of readers, especially those who need happy endings or those those who feel strongly about issues of faith, but that doesn't mean they shouldn't give it a try. I keep coming back to that word, fascinating, but that's the best way I can think of to describe The Devil's Detective. It's not particularly enjoyable, and the bleak depths of winter are perhaps not the best time to wallow in such darkness and depression, but it is a fascinating study of Hell and humanity that never shies away from the journey it began.