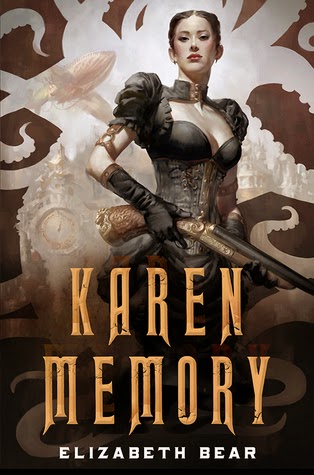 By now you've probably read more than a few gushing, over-the-top, positive reviews of Karen Memory. I got sucked in by the praise myself, to the point where I rather boldly harassed the local Chapters for not carrying a copy, but I'm pleased to declare the praise warranted.

Elizabeth Bear has crafted an unassuming sort of story that's equal parts science fiction, steampunk, alternate history, western, pulp adventure, romance, and thriller. Surely, it seems like it should be too much, like there should be too many things going on, but it all comes together in just the right proportions to make for a fun read that will have you turning pages late into the night.

It all begins and ends, of course, with Karen Memery (she spells her name with an 'e' in place of the 'o'), who serves as both protagonist and narrator. She has an incredibly distinct voice, all-but defining the story with her cadence, pacing, and word choices. She's unfailingly polite, and rather coy about her profession, but also honest about just what 'sewing' entails. Really, it's Karen who makes the story work so well, with so much of the drama, the tension, and the humor resting solely on her shoulders. In addition, it's Karen who keeps us grounded, and who provides such a down-to-earth sort of feeling for what is, at times, such an oddly fantastical tale.

Surrounding Karen is a solid cast of characters, comprised not just of the kind of strong, bold, brave women you'd expect to find in a frontier town, but also of a few good men - including a lawman who inspired legends of Lone Ranger, and his Comanche sidekick. Even more important to the story, however, is the villain - one Peter Bantle. It's incredible to have such loathing for a character of whom we see so little, but Bear does a fine job of driving home the physical, emotional, and psychological implications of his villainous acts. Even without his electrical mind-manipulation device, he epitomizes the concepts of scum and villainy. It's rare that I want to see a literary character dead with such passion, but he really gets under the skin.

If I were to have one minor issue with the book it would be the pacing. The first half is rather slowly paced, seemingly concerned as much with the telling as the tale, but then the action just explodes and we race towards a frantic climax. It's almost like two books in one, mashed together for the sake of convenience. The first half is a period piece, a romance, and a western, while the second brings the thriller and the steampunk elements to the forefront. It does get a bit silly with the pulp and steampunk elements - you have to see what Bear does with a massive sewing machine, and the homage to Captain Nemo is fantastic - but that's part of the fun. That's not to say I didn't enjoy both halves, but there is a distinct boundary in the text where we transition from one story to another.

I doubt there's much else I can say that's already been said before, and I'm conscious of spoiling some of the surprises, so I think I'll just leave it there. Karen Memory is a book crosses genres and pushes some boundaries, but it's Karen Memery's narration that really makes the tale. If you're at all curious, take my word for it, the hype is legitimate, so grab yourself a copy and settle in for a read.