on February 23, 2015
Disclaimer: I received an ARC of this title from the publisher in exchange for review consideration. While I make every attempt to avoid spoilers, please be aware that an ARC synopsis, press release, or review request may disclose details that are not revealed in the published cover blurb.

Although I've found myself souring a bit on science fiction lately, with my reading tastes driving me firmly back into the realms of epic fantasy, horror has always been my first love. It's what I remember reading first, and what has driven most of my own writing endeavors. So, while I hardly need an excuse to celebrate the genre, events like Women in Horror Month certainly do provide a convenient prompt for me to look beyond the towering review pile and into well-stocked TBR shelves that fill my e-reader and (quite literally) cover the house. 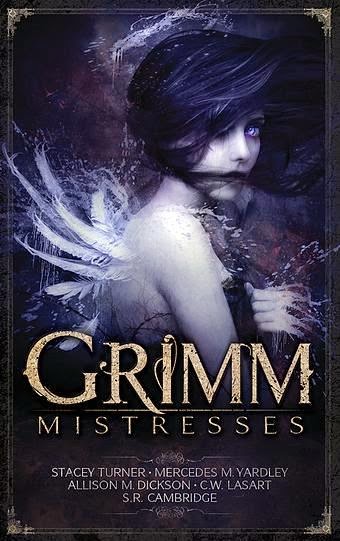 Thanks to the gang at Ragnarok Publications, I was able to snag a copy of their new Grimm Mistresses collection, featuring retellings of Grimm's fairy tales by Stacey Turner, Mercedes M. Yardley, C.W. LaSart, Allison M. Dickson, and S.R. Cambridge.

Mercedes M. Yardley opens the collection with a sadly powerful tale called "Little Dead Red." If you've read Yardley before, then you know she pulls no punches, so don't go looking for happy endings here. This is a very dark tale of child abuse, brutal murder, and one mother's desperate quest for vengeance. It's an emotional tale, and one that really gets under your skin, with a final twist/reveal that sucker-punches you in the gut.

The next novel in the collection, "Nectar," by Allison M. Dickson isn't necessarily any lighter, but definitely more rooted in fantasy and wonder than cold, hard sorrow. Two men find themselves seduced, captured, and fed upon by two beautiful, unearthly beauties who smell and taste like an intoxicating blend of sweets and sugars. They're also very addictive, fattening up their captives even as they drive them slowly insane. As for why and how . . . well, that's not my place to say, but it's a fantastic twist on the fairy tale theme.

"The Leopard's Pelt" by S.R. Cambridge reminds me more of English horror stories like The Monkey's Paw than anything out of Grimm, but it was still one of my favorites in the collection. Henry Lowery, WWII survivor, ends up stranded on a strangely deserted island, with only an empty collection of huts and a single Japanese corpse to keep him company. Until, that is, 'she' arrives . . . a leopard who offers him salvation and infinite wealth in exchange for seven years penance. It's a simple story, but well-told, with more than one reward to be found before the end.


It takes a while to warm up to "Hazing Cinderella" by C.W. LaSart, with the endless bickering and empty threats of teenage girls growing more tedious by the page, but the set-up is necessary to justify the shift, and introduce the twist that follows. The magic here is as much black as it is fairy, and it leads to some of the strongest, creepiest, most imaginative death scenes in the collection. The ending lacks the power of the other tales, kind of fading away as it does, but it still makes for a guilty pleasure.

Stacey Turner, former owner and now Managing Editor of the Angelic Knight Press imprint, wraps things up with "The Night Air." While this one is very much rooted in fairy tale lore, it also has a distinctly surreal Twilight Zone feel to it. The small town of Hubble is as quaint as it is backward, with no love for technology or outsiders, and little to say about the small, children's tombstones found in the woods. All I'll say about this one is that Marla really should have listened when she was told to "keep those windows closed tight tonight" against "things that call to the children." Creepy, eerie, and surreal, but a fitting end to the collection.

Grimm Mistresses is a relatively short collection, with each tale entirely suitable for being read in a single sitting, but there's enough of diversity to the stories (and the story styles) to make it a compelling read. It's as much about the feel of the fairy tale as it is about the content, with warnings, lessons, and morals to be found in the darkness.