on October 11, 2014
Stacking The Shelves and Mailbox Monday are a pair of weekly memes that are about sharing the books that came your way over the past week, and which you've added to your shelves - whether they be physical or virtual, borrowed or bought, or for pleasure or review.

I'm still tired, stressed, and generally in a foul mood, but I've been a bit more restrained in feeding my book addiction. On he plus side, I still haven't violently kicked anything, although I did come this close to hurling my phone against the wall.

Anyway, the first of this week's review titles is actually a March release, so lots of time to read, but it's so fitting for my Halloweird Creepfest that I'm almost tempted to dive in right now. Check out the blurb below and tell me it doesn't intrigue you . . .

The Devil's Detective: A Novel by Simon Kurt Unsworth

Thomas Fool is an Information Man, an investigator tasked with cataloging and filing reports on the endless stream of violence and brutality that flows through Hell. His job holds no reward or satisfaction, because Hell has rules but no justice. Each new crime is stamped "Do Not Investigate" and dutifully filed away in the depths of the Bureaucracy. But when an important political delegation arrives and a human is found murdered in a horrific manner—extravagant even by Hell's standards—everything changes.

The murders escalate, and their severity points to the kind of killer not seen for many generations. Something is challenging the rules and order of Hell, so the Bureaucracy sends Fool to identify and track down the killer. . . . But how do you investigate murder in a place where death is common currency? Or when your main suspect pool is a legion of demons? With no memory of his past and only an irresistible need for justice, Fool will piece together clues and follow a trail that leads directly into the heart of a dark and chaotic conspiracy. A revolution is brewing in Hell . . . and nothing is what it seems.

The other is actually an August release - yes, almost a year away - that has the potential to either be a great adventure, or a heavy-handed piece of social commentary. It's a risk, but I'm hoping there's enough of the former to balance the latter. 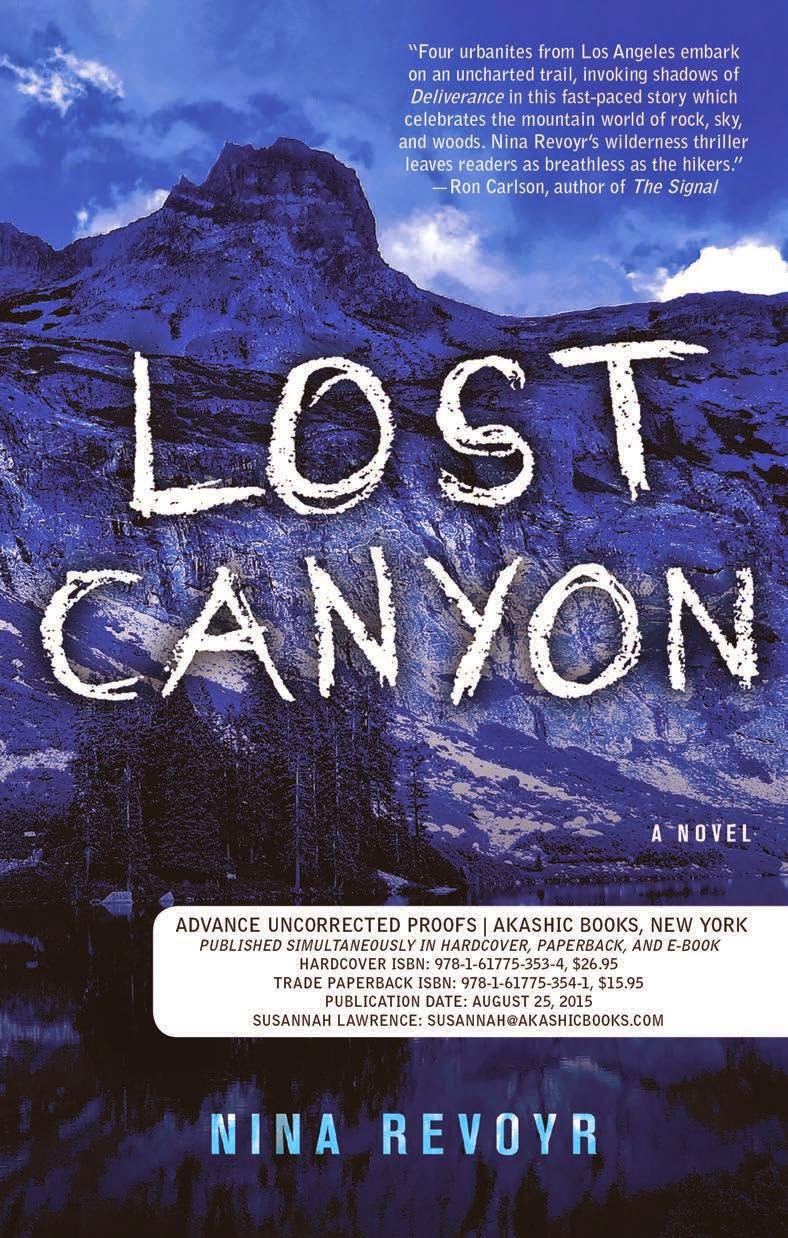 Four people on a backpacking trip in the Sierra Nevada find more adventure than they ever imagined. Each of them is drawn to the mountains for reasons as diverse as their own lives. Gwen Foster, a counselor for at-risk youth, is struggling with burnout from the demands of her job. Real estate agent Oscar Barajas is adjusting to the fall of the housing market and being a single parent. Todd Harris, an attorney, is stuck in a lucrative but unfulfilling career--and in a failing marriage. They are all brought together by their trainer, Tracy Cole, a former athlete with a taste for risky pursuits.

When the hikers start up a pristine mountain trail that hasn't been traveled in years, all they have to guide them is a hand-drawn map of a remote, mysterious place called Lost Canyon. At first, the route past high alpine lakes and under towering, snowcapped peaks offers all the freedom and exhilaration they'd hoped for. But when they stumble onto someone who doesn't want to be found, the group finds itself faced with a series of dangerous conflicts, moral dilemmas, confrontations with nature, and an all-out struggle for survival.

It's Monday! What Are You Reading? is another weekly meme, this time focused on what books are spending the most time in your hands and in your head, as opposed to what's been added to your shelf. I'm abandoning my usual release day schedule this month and picking titles that fit with the Halloweird Creepfest theme:

• The Deep by Nick Cutter
The 'Gets is one of the most intriguing (and terrifying) plagues ever unleashed on humanity, and that's just treading the surface of this underwater ocean horror.

• Not Quite the Classics by Colin Mochrie
Whose Story is it Anyway? Sometimes you just need to laugh, and for that reason Canada's own funnyman recreates classic stories in 'Whose Line' fashion.

• Black Dog: Hellhound Chronicles by Caitlin Kittredge
The cover blurb encourages us to think Kill Bill with demons and gangsters instead of martial arts. Okay, I'm in . . . sounds like bloody good fun.