on September 20, 2014
Stacking The Shelves and Mailbox Monday are a pair of weekly memes that are about sharing the books that came your way over the past week, and which you've added to your shelves - whether they be physical or virtual, borrowed or bought, or for pleasure or review.

Nothing new on the review front this week - with things already getting busy at the new job, and ghost tour season kicking into high gear, I've deliberately tried to avoid adding new titles I likely won't have a chance to read anytime soon. Having said that, I took full advantage of the Amazon gift card my ex-colleagues sent me away with, and the first shipment of books arrived this week. 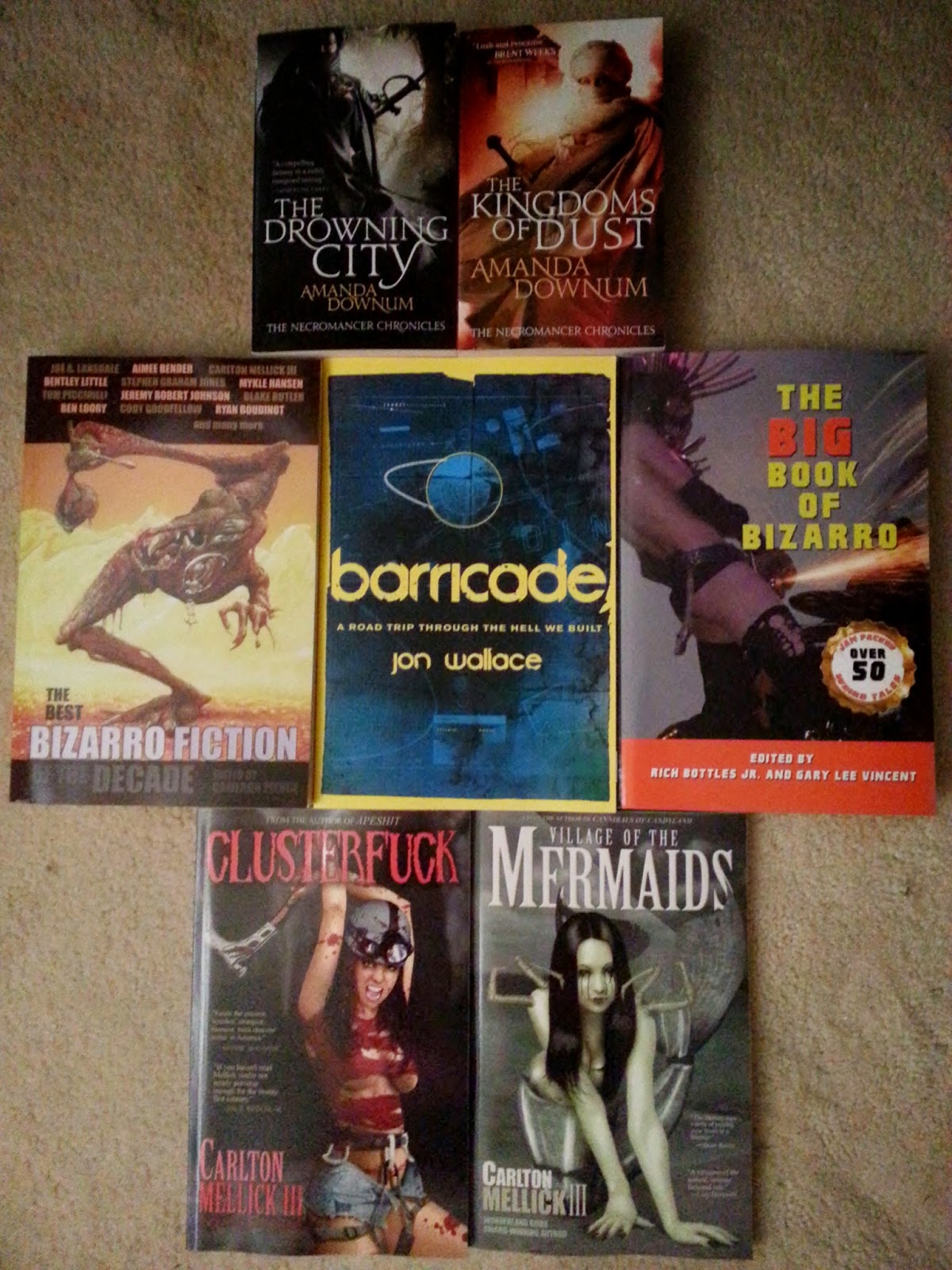 For some reason, I've had the second book in Amanda Downum's The Necromancer Chronicles on my shelf for ages (which I only realized when I sat down to read the series on vacation this summer), so I decided it was finally time to get the first and third books to accompany it.

Jon Wallace's Barricade is a new release I missed out on when it hit the shelves earlier this year, while the two Carlton Mellick III titles are ones I gave up on waiting to his e-book format (I'm especially interested in Clusterfuck, a sequel to Apeshit - my first experience with Mellick).

As for the two collections, The Best Bizarro Fiction of the Decade & The Big Book of Bizarro, they're books I can indulge in when I have the time, reading a story here and a story there, without feeling compelled to polish off the entire collection in sequence.

It's Monday! What Are You Reading? is another weekly meme, this time focused on what books are spending the most time in your hands and in your head, as opposed to what's been added to your shelf. I've polished off a bunch of shorter review titles lately, with reviews coming next week, but the big titles on hand are:

• Of Bone and Thunder: A Novel by Chris Evans
"Apocalypse Now meets The Lord of the Rings in a bold new fantasy from the acclaimed author of the Iron Elves trilogy." That tagline was enough to pique my interest right there.

• Fearsome Magics by Jonathan Strahan
Strahan's anthologies are always a high point of the year for me, just packed solid with one fantastic story after another. I've been sitting on this one for a while, but I'm anxious to get reading.

What's topping your shelves this week?
bizarro epic fantasy Mailbox Monday sci-fi Stacking The Shelves suvudu What Are You Reading?