on June 21, 2014
Stacking The Shelves and Mailbox Monday are a pair of weekly memes that are about sharing the books that came your way over the past week, and which you've added to your shelves - whether they be physical or virtual, borrowed or bought, or for pleasure or review.

I managed to behave myself this week and keep the towering TBR pile in check with just a few additions:

In a dark arctic wasteland, Mr. Watts, a gentleman with a lightbulb for a head, wakes up with little memory of his past. He links up with Prisma, a beautiful ex-prostitute, and Doc, an old man who can heal people with his hands. Mr. Watts helps Prisma overcome the Gutter Bitches; in exchange for his help, Doc and Prisma embark with him on a journey to replace his lightbulb head, and maybe provide a bit of generous light to the dark, apocalyptic world.

With a bloodthirsty Telemarketer on his tail, existential angst, and the world's future perched on his shoulders, Mr. Watts has his work cut out for him. No one ever said a gentleman's duty would be easy... 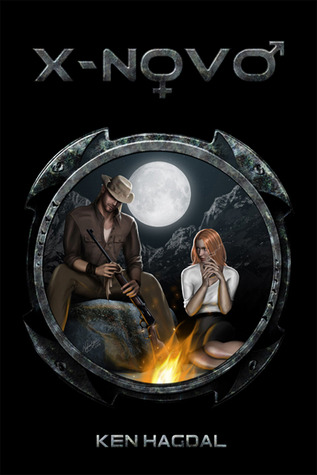 Following the discovery of the genuine Dead Sea Scrolls, women get to learn it’s a tampered-with version of the Old Testament which was used to keep their foremothers in submission for nearly two millennia. Hilarity fails to ensue.

After a first, scorned, attempt at enforcing the female-friendly newfound teachings, the not-so-weaker gender ends up revolting and snatching the reins of the US administration from the callous hands of Patriarchy. Two novelties will be born out of their reforms towards a healthy and peaceful society: the Collar, an electronic device for suppressing violent impulses in men, and the Pool, the State-run dating service for women.

The first Anniversary of the Revolution is now only a few days away. As the head of the Department of Information, Lisa Fenrich is all too aware of the stakes for her government. What she’s about to discover is that the holes she’s been plugging were trifles compared to the one about to open under her feet.

Disgraced yet unbowed, she will set out on a quest to recover the last secret fragment of the Holy Scriptures. One that would spell the end of the age-old rift between men and women if revealed to the world, but that the Presidentess she so staunchly supports intends to tweak around for her political survival; and maybe more.

A novella about three young unwed couples, all brilliant liberal-minded graduate students, who meet in an isolated farmhouse on a summer weekend. Three years ago the owner of the house, the grandfather of one of the young men, died in the attic bedroom. The puritanical old man would not have approved of the hedonistic activities and the atheistic discussions that take place under his roof, and neither does his "ghost," which is stirred to a homicidal rage. But is the ghost real, or do the old man's antiquated values merely live on in his grandson's tormented mind? The conflicts lead to the dissolution of the grandson's relationship with his girlfriend, to his estrangement from his other four friends, and ultimately drive him to an extreme solution to get rid of the ghost, with plenty of scares along the way.

In the sequel to Inferno: Infection, Dennis and his band of would-be saviors make an assault on Lilith's lair. In the aftermath, lives are lost and Lilith reveals a plan to turn the world into a perverse Hell on Earth.


• The Last Town by Blake Crouch
The third book of The Wayward Pines Series hits the shelves, just in time for the series to hit the small screen.

• City of Stairs by Robert Jackson Bennett
An atmospheric and intrigue-filled novel of dead gods, buried histories, and a mysterious, protean city - sounds good to me!

• Traitor's Blade by Sebastien de Castell
A swashbuckling adventure to foil the conspiracy, save the girl, and reunite the Greatcoats. Can't wait to dig into this one.