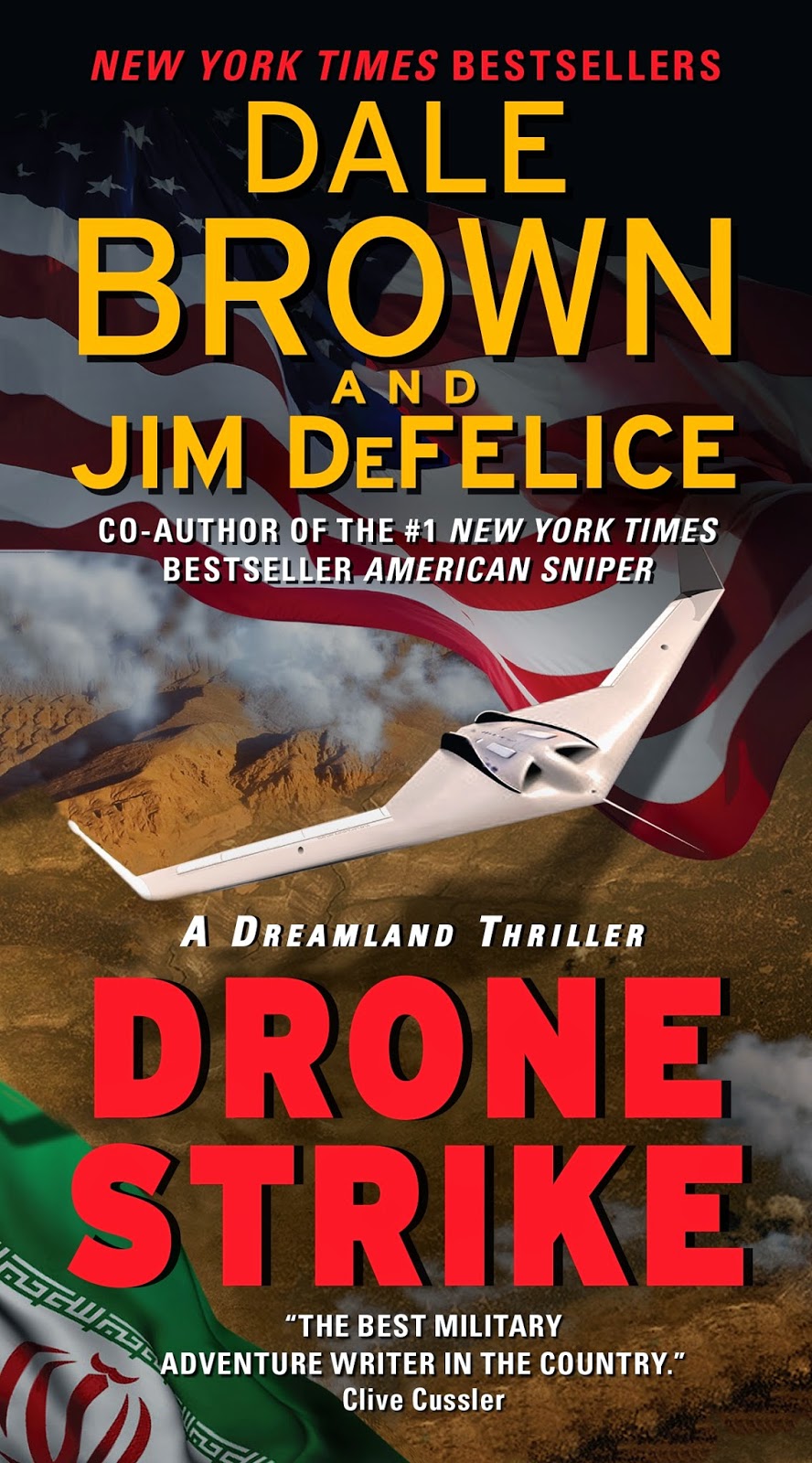 Although tighter, shorter, and a bit lighter on the technological details, Dale Brown & Jim DeFelice's novels have always struck me as almost a TV version of a Tom Clancy blockbuster (a la Op Center). The stakes are very much the same, but the scope and the range are very different, with the few Dreamland novels I have read coming across as intimate, personal accounts of men going into covert battle, as opposed to epic tales of war.

Drone Strike is the 15th novel in the series, but it works completely fine as a standalone tale. There may be some deeper layers to the story that new readers will miss, or relationships where the significance of events will be overlooked, but not having read a Dreamland novel in quite a while I can still say it was a fine read all on its own.

The book does start off somewhat awkwardly, with some very heavy technological detail that very nearly turned me off, but once the stage is set and the details understood, Brown and DeFelice largely let the characters run with the tale. Turk is a solid action hero, a little too eager and patriotic to be real, but precisely the kind of man you want standing between the world and nuclear war. He's surrounded by a diverse cast of characters whom we get to know quite well, which makes the death toll among the heroes almost shocking. The idea of a female President is hardly novel in this day and age, and it was refreshing not to be constantly reminded how awesome or progressive it is, and to simply allow her to be the President.

Aside from an obvious love for military technology (and I must say the mini-drones are very cool), Brown and DeFelice clearly share a interest in exploring the fine line between doing your duty and doing what's right. There were several occasions in the story where that conflict came to a head, particularly where politics and ethics get in the way, but I think the decisions fall on the right side of that line more often than not. In addition, there's some great scenery, with the desert scenes having a lot more depth and detail to them than I expected. These are guys who have done their homework, and who know how to orient the reader in the scene, no matter where in the world the story takes them.

All-in-all, a fun read that I managed to knock off over a few days. Like I said, I'm not sure where Drone Strike falls in the larger overall Dreamland story line, but it's a fine place to start.

Dale Brown is the author of numerous New York Times bestsellers, starting with Flight of the Old Dog in 1987, and most recently Tiger’s Claw. A former U.S. Air Force captain, he can often be found flying his own plane over the skies of Nevada.

Jim DeFelice is the co-author of the #1 New York Times bestseller American Sniper, as well as the New York Times bestseller Code Name: Johnny Walker. DeFelice is the author of Omar Bradley: General at War, the first in-depth critical biography of America’s last five-star general. He also writes a number of acclaimed military thrillers, including the Rogue Warrior series from Richard Marcinko, founder of SEAL Team 6, as well as the Dreamland series.

“…Brown and DeFelice are at the top of their game…The pages fly by as fast as the quicksilver drones while Turk faces one exciting, life-threatening complication after another.” – STARRED review, Publisher’s Weekly

On the President's orders . . . one man is tasked with averting nuclear war

In the Nevada desert, the high-tech future of warfare is being conceived and constructed at a top-secret military facility called Dreamland. Its team has used stealth, raw nerve, and technology to defuse nightmares all across the globe. But when the United States develops intelligence indicating that the Iranians are in the final stages of assembling a nuclear bomb, the President orders Dreamland’s Whiplash team to destroy it. Young Air Force ace Turk Mako must pilot a nano-UAV attack from a ground base within Iranian territory. In the face of intense resistance, Turk and a Delta Force team succeed in destroying the target—only to find that there are two more secret nuclear sites, and at least one that contains a device.

Forced to improvise, Turk and his escorts fight their way through Iranian ground and Air Force defenses led by an elite Quds force member to the secret site. With the fate of the Middle East and the world hanging in the balance, Turk must ensure the destruction of the Iranian nuclear program—possibly at the cost of his own life.

DRONE STRIKE is a riveting adventure from two acknowledged masters at the top of their form—combining political intrigue, cutting edge military technology, and ripped-from-the-headlines immediacy.