on May 25, 2014
Stacking The Shelves and Mailbox Monday are a pair of weekly memes that are about sharing the books that came your way over the past week, and which you've added to your shelves - whether they be physical or virtual, borrowed or bought, or for pleasure or review.

Still keeping the review pile in check, but a few new additions this week:

On the eve of a recurring catastrophic event known to extinguish nations and reshape continents, a troubled orphan evades death and slavery to uncover her own bloody past… while a world goes to war with itself.

In the frozen kingdom of Saiduan, invaders from another realm are decimating whole cities, leaving behind nothing but ash and ruin.

As the dark star of the cataclysm rises, an illegitimate ruler is tasked with holding together a country fractured by civil war, a precocious young fighter is asked to betray his family and a half-Dhai general must choose between the eradication of her father’s people or loyalty to her alien Empress.

Through tense alliances and devastating betrayal, the Dhai and their allies attempt to hold against a seemingly unstoppable force as enemy nations prepare for a coming together of worlds as old as the universe itself.

In the end, one world will rise – and many will perish.

Too good a deal to pass up, but with an ominous secret. The old Victorian Mansion has dwellers that do not want to be dispossessed. As the house reveals it's past, will the couples marriage survive The Flip? 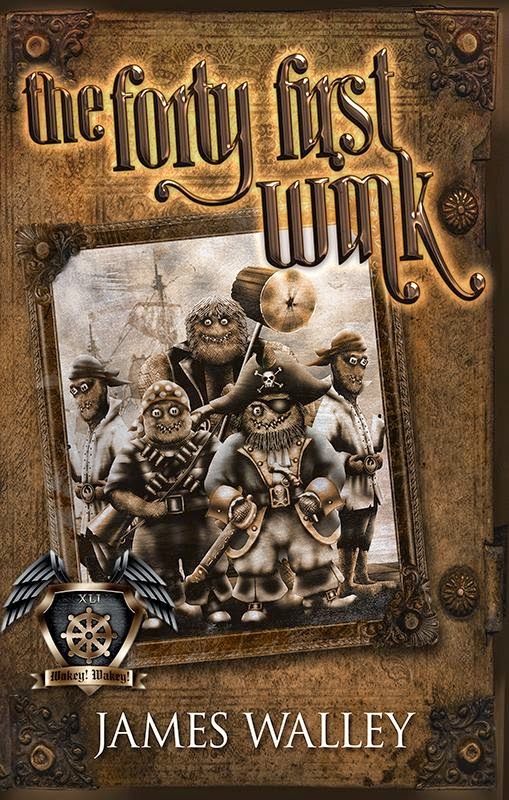 Marty is having a bad morning. Roused from slumber by a gang of polo mallet-wielding monkeys and a mysterious voice in his wardrobe, he must quickly come to terms with the fact that the world outside his door is now the world inside his head. Lying in wait amidst bleak, gloomy streets, deserted theme parks, and circus-themed nightclubs, lurks the oppressive shadow of a myriad of giggling, cackling pursuers, hell bent on throwing a custard pie or two into the works.

Assisted by a string of half-cocked schemes, a troupe of tiny unlikely allies, and (literally) the girl of his dreams, Marty sets out on a heroic quest to wake up and get out of bed.

Early reviews have compared it to Terry Pratchett and Douglas Adams. Equal parts epic, funny and dark, The Forty First Wink plummets headlong into the realms of askew reality, adding elements of the macabre, and squeezing in an unlikely love story for good measure. It will take you on a journey where not even the sky is the limit, and literally anything could be around the next corner. The question is, do you have the guts (and the sanity) to find out?

NEW HIGH STAKES THRILLER FROM BEST-SELLING AUTHOR ASKS READERS, WHAT DO YOU DREAM? Trapped between a man who vows to save her future and a lover from her past, Princeton historian Christa Devlin is thrust into a heart-pounding quest for one of the world's most dangerous and powerful artifacts. . . the Emerald Tablet. Last seen in the hands of Alexander the Great, the Emerald Tablet can open the portal between life and afterlife, between man and spirit and, Christa hopes, between her and the traumatized mind of her beloved father. Her ruthless adversary will stop at nothing to find the Tablet first and weaponize its power using the mind-controlling nanobot technology at the island's prototype Dream Resort.

Christa races through the jungle-choked island where the imagined becomes real, prehistoric animals morph into nightmarish beasts and love can twist into evil. She must find the Emerald Tablet and solve its ancient puzzle before the world spirals into a catastrophic future and she loses her father forever. FROM THE AUTHOR: What if technology could tap into your inner thoughts and make the imagined become real? Some might develop this as the ultimate amusement ride or, taking it deeper, realize that it's a portal to our inner soul, a way to strip away physical limitations and discover what truly makes us human. But this concept is as old as humanity. 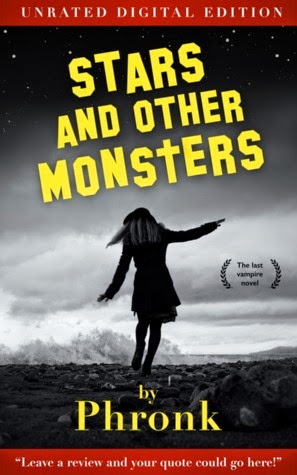 Stan Lightfoot is the perfect paparazzo. His dog, Bloody, can track down anybody, anywhere, which comes in handy whenever a celebrity involved in a juicy scandal tries to avoid public attention. He’s about to get the perfect picture—a real privacy-invading winner—when he runs into a vampire who ruins his life.

From the dark and vulgar mind of Phronk—author of Baboon Fart Story (Google it)—splashes a neo-vampire trip through nightmare America, full of movie stars and other soulless creatures, mind-numbing romantic comedies, and a Wal-Mart in every town.

When the vampire reveals a celebrity crush of her own, Stan finds a way to keep her from eating him. Helping a murderous monster fuck a movie star wasn’t exactly what Stan had in mind when he got into photography, but it’ll buy him a few days. Can he find a way to escape a creature with god-like power before she reaches her destination?


• A Turn of Light by Julie E. Czerneda
With the second Night's Edge book due for release in November, it's long since past time I get cracking on Julie's first fantasy effort. Stunning so far.

• The Visitors by Sally Beauman
My first attempt got bogged down in relationships when I wanted archaeology, so taking a second crack at this one to see if we connect.

• The White Towers by Andy Remic
The Iron Wolves have been sentenced to death by insane King Yoon. If this is even half as good as the first, it'll be awesome

What's topping your shelves this week?
epic fantasy horror humour Mailbox Monday Stacking The Shelves thriller What Are You Reading?