Waiting On Wednesday - Veil of the Deserters by Jeff Salyards

on March 05, 2014
"Waiting On" Wednesday is a weekly event, hosted by Jill over at Breaking the Spine, that spotlights upcoming releases that we're eagerly anticipating. 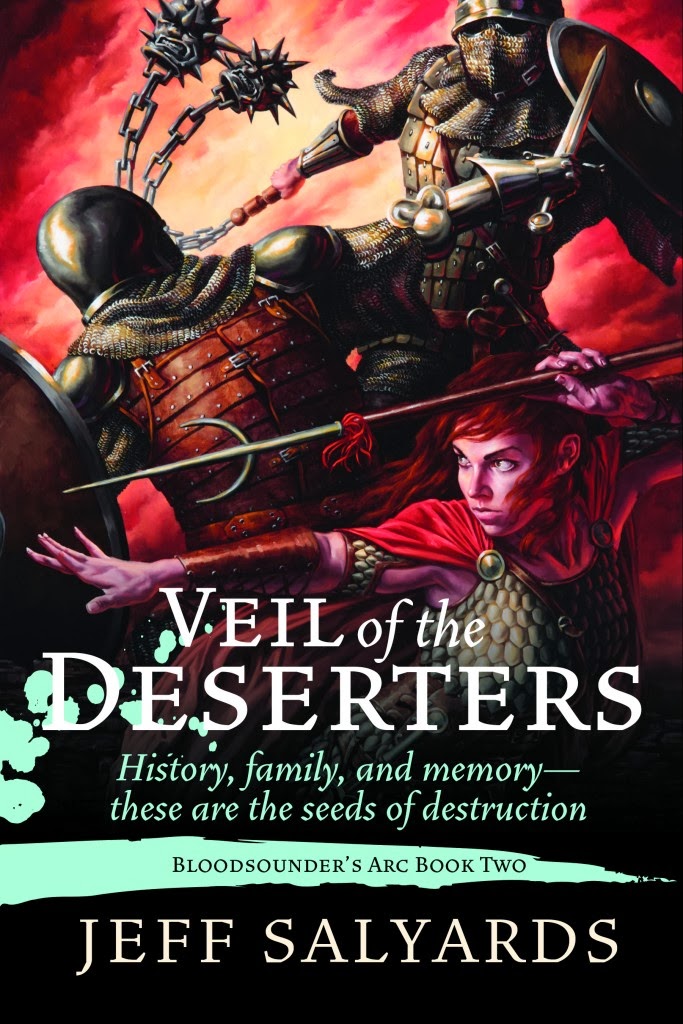 Braylar is still poisoned by the memories of those slain by his unholy flail Bloodsounder, and attempts to counter this sickness have proven ineffectual. The Syldoonian Emperor, Cynead, has solidified his power in unprecedented ways, and Braylar and company are recalled to the capital to swear fealty. Braylar must decide if he can trust his sister, Soffjian, with the secret that is killing him. She has powerful memory magics that might be able to save him from Bloodsounder’s effects, but she has political allegiances that are not his own.

Arki and others in the company try to get Soffjian and Braylar to trust one another, but politics in the capital prove to be complicated and dangerous. Deposed emperor Thumarr plots to remove the repressive Cynead, and Braylar and Soffjian are at the heart of his plans. The distance between “favored shadow agent of the emperor” and “exiled traitor” is unsurprisingly small. But it is filled with blind twists and unexpected turns. Before the journey is over, Arki will chronicle the true intentions of Emperor Cynead and Soffjian.

While I had a few minor quibbles with the telling, I really enjoyed Scourge of the Betrayer and have been anxious to see how Jeff develops things in a second novel. Having followed his blog and kept in touch on Facebook since then, I've gotten something of a glimpse into his creative process, and it's made me more anxious than ever.
fantasy Jeff Salyards suvudu Waiting On Wednesday