Thriller Review: The Blood of Alexander by Tom Wilde 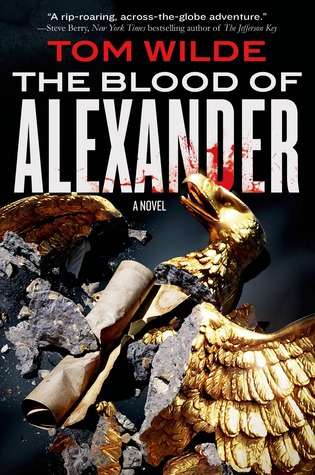 A modern Indiana Jones steals a relic of Alexander the Great in Blood of Alexander, the thrilling debut from Tom Wilde.

Despite a hero who is more James Bond / Remo Williams than Indiana Jones, and an adventure that owes more to the Dan Brown sub-genre than the pulp serials that inspired Lucas & Spielberg, The Blood of Alexander is still a fun, action-packed adventure that will have you frantically turning pages late into the night. Even if Tom Wilde's debut is a little absurd in parts, especially with its suitably maniacal super-villain, it's more than redeemed by the action, adventure, and imagination that drive it.

Jonathan Blake is an interesting hero. He's a trained archaeologist, betrayed by one relic smuggler, only to be rescued from his filthy, festering prison cell by another. In exchange for his assistance in rescuing historical treasures from dishonest smugglers around the world, the Argo Foundation has seen to it that he's extraordinarily well-trained in how to steal, how to fight, and how to survive. Physically, he is very much on par with a James Bond type hero, but intellectually and emotionally he remains something like a young Indiana Jones. Far too trusting of beautiful women, and incredibly naive when it comes to global intrigues, he remains passionate about history - so much so that he feels genuine sorrow for the historical treasures lost, and horror for those destroyed. The fact that he doesn't just shrug off those losses is one of the things that I appreciated most about the novel.

While James Phillip Vanya shares that passion for history, his criminal passions are far more selfish. With his mega-yacht, island fortress, and sycophantic followers, he could have crawled out of just about any James Bond adventure. He's a homicidal, genocidal, charismatic megalomaniac who has used his religious influence to build a cult that rivals that of Scientology. His goal is nothing less than world domination, a goal that requires much of the world's population to die in a globally-orchestrated act of biological terrorism, before he rebuilds it with genetically engineered descendants of Alexander the Great. All his plan needs to set itself in motion is a tiny sample of DNA from Alexander's mummified body - and locating that lost, legendary tomb, of course, where Vanya and Blake cross paths.

This was a novel that remained entertaining from start to finish, with only the occasional pause to breathe and reveal the plots and betrayals interrupting the adventure. It races along from one destination to another, carried largely by the likability of Blake, and the intellectual fascinating for his hunt. Wilde has fun with history here, drawing on both fact and fiction to lead the chase to Alexander's final resting place. Napoleon Bonaparte, Joseph Fouché, and Robert Fulton all play heavily into the story, as might be expected, but so do Jules Verne, Percy Shelley, and Lord Byron. Without giving anything away, the final set-piece, where they all come together, is worth of the climax to any Indiana Jones adventure. Wilde plays with the reader in other ways as well, teasing us with plots, counter-plots, betrayals, and double-crosses. He does it so well, in fact, that I felt duped and chagrined multiple times over the same character!

The novel ends with the seeming promise of more Jonathan Blake adventures, so here's hoping there's an entire literary franchise waiting in the wings. I'd really like to see what Wilde will do with Blake, given the way he matures and grows throughout the story, and I'd curious as to how his relationship with the Argo Foundation might evolve. Regardless of where he takes the story next, however, I hope Blake never loses his fiercely protective nature when it comes to lost artifacts. Indiana Jones and Robert Langdon are both a little too nonchalant at times when it comes to the catastrophic destruction of ancient ruins, so that passion for preservation is as welcome here as it is refreshing. Both action-packed and intellectually-intriguing, The Blood of Alexander is one heck of a fun read, and a great way to kill a late Spring afternoon on the deck or at the cottage.