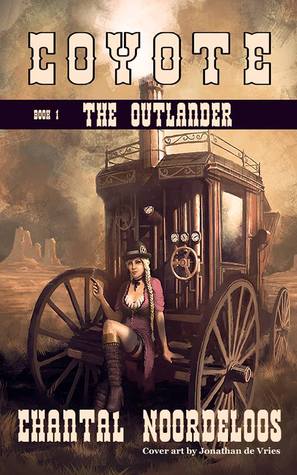 There's a version of the old West not taught in schools, one where steampunk contraptions rattle through the streets, one-way rips in the fabric of reality randomly appear, alien Outlanders walk among us . . . and the best bounty hunter around is a cigar-chomping woman by the name of Coyote.

Such is the premise behind Coyote: The Outlander, a fun tale that's also an intriguing reading experience (but more on that in a moment). Chantal Noordeloos deftly juggles her genres here, with a Western tale that feels authentic, and a sci-fi adventure that intrigues, but which never overwhelms the central gun-slinging story. Having said that, there's a lot going on beneath the surface here that I'd love to see explored in another, longer tale, but that's curiosity talking, not any sort of discontent with how the story is told.

Coyote is a great character, one who reminds me of Sharon Stone in The Quick and the Dead - a deliberate caricature who never tries to deny what she is. A trouser-wearing, cigar-smoking, whiskey-drinking, dead-eye shooting bounty hunter, she has the confidence and strength of character to stand her own against any man but one. She's the kind of woman who not only ignores the sexist objections aimed her way, but who also crushes the racist ones aimed toward Caesar, her silent black partner. She has her vulnerabilities, but they add colour to her rather than defining her.

She's also a woman with a conscience, one who refuses to hunt down Outlanders simply because of who they are. When the bounty for a murderous, child-killing Outlander - a despicable alien who just happens to work for the outlaw who killer her father - comes her way, however, she's quick to take the job. That, of course, sets up a confrontation with the charismatic villain, James Westwood, upon which the whole story turns. Without spoiling things, the final few scenes will have you rethinking the title as much as the woman.

As for that intriguing reading experience I mentioned, each chapter has a secret code that you can use on the http://www.coyotethebooks.com/ website to unlock additional scenes and stories, a soundtrack, and author's notes. You can enjoy the story without ever taking a peek, but they do accentuate things nicely. It's a neat gimmick, and one I suspect we'll be seeing more of in the future.

All-in-all, Coyote: The Outlander was a thoroughly enjoyable story, one with imagination, humour, action, and even a little emotion. Hopefully this isn't the last we've seen of Coyote.